Five years ago farmers would have laughed had anyone said that farming without the use of chemicals was profitable. Now, many farmers on the island of Taveuni in Fiji are convinced it is possible to grow crops without chemical input, get good yields and earn a sustainable income. This has become clear for many farmers after seeing the fruits of chemical free cultivation in demonstration plots established by the non government organization Tei Tei Taveuni in partnership with Organic Matters Foundation, a Pacific based NGO that conducts Soil Schools.

“I have been blinded for so many years and now my eyes have been opened,” said 55 year old famer Peremo Nacumu after attending the last Soil School held in Taveuni, Fiji in February. He is one of the 160 farmers from the Garden Island of Fiji who have learnt about basic soil biology and organic farming.

“A process that I learnt was how to make plant food from seaweed and guano (bird dropping). I have applied it on my vegetable farm and during this hot season my vegetables are green and very lush. A very big difference from when I used to use fertilizer,” Peremo said.

Eric Narayan a farmer who adopted biological farming practices over chemicals and is delighted with the change he has seen in his yield and income.

“One of my biggest mistakes was using fertilizers and not having any knowledge of what it does to the soil, nor was I aware of the impact of the overuse of weedicide. The new insights from the Soil Schools has really helped farmers. After a soil test taken from my farm land I was told that my soil lacked lime, as calcium is a vital component of the soil. So now I am using natural lime in the form of burnt crushed dead coral from the beach and thrown onto the farm. In a couple of weeks the changes were obvious and I was able to share this knowledge with about 30 farmers in the area,” said Anil, who has been farming for more than 25 years in Taveuni.

Tei Tei Taveuni Farmers Association through funding from the Global Environment Facility (GEF) Small Grant Programme implemented by the United Nations Development Programme (UNDP) has made it possible for farmers like Peremo and Anil to take a more sustainable approach to farming.

The funding of USD$50,000 for two years attracted further funding of AUD$265,000 from AusAID, extending the project by three years.

At the end of the two year project in February, this year, 160 farmers had attended soil schools and seen the benefits of chemical free farming through the yields produced from the three demonstration plots established under the programme. The 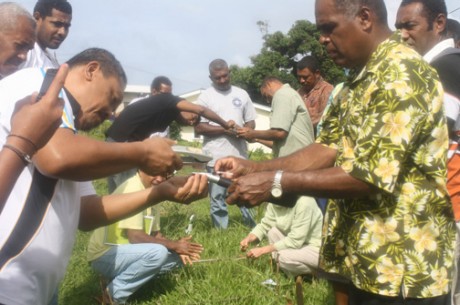 participatory farmer trainings known as Soil Schools, provided culturally appropriate learning experiences that transferred biological farming practices, soil health education and sustainable farming to those most in need. The training was delivered by Michael Smith, Principal Educator and Cheryl Smith, Managing Director of Organic Matters Foundation, who have both been involved in sustainable agriculture for 25 years.

Taveuni is a volcanic island with fertile volcanic soil and provides the bulk of Fiji's staple crops such as coconuts, taro, tapioca, kava, pineapples, banana, vegetables and tropical fruits. Taveuni also has the highest rate of deforestation in Fiji, mainly due to the unsustainable production of taro (dalo). The constant search for “new land” for taro, a lucrative export root crop, has led increasingly to the clearing of extensive areas of land, including on steep slopes. The Ministry of Agriculture estimates that approximately 60-80% of land once cultivated with taro is in fallow.

The Tei Tei Taveuni and Organic Matters Foundation’s Soil Schools Programme offers a series of two day classroom and field based sessions, based on sustainable & biological farming and with the land degradation issues faced by Taveuni farmers. Specifically developed for primary producers and landcare groups and based on adult learning principles, this highly interactive course is designed to provide participants with an understanding of the principles behind biological farming along with practical decision-making and hands-on skills when it comes to implementing sustainable, biological farming options.

Results from the demonstration plots speak for themselves. Farmers were impressed with the yield produced chemical free. In a particular demonstration plot, a total of 344 taro were planted and 82% of the crop was sold, fetching $486.00. The average weight of the taro was 1.14kg, considered above average crop for the export market. Previously, the same farming plot produced dalo out of which only 30% could be sold.

Peremo said the Soil School Programme gave farmers the understanding of soil and soil life and how important it is to balance the soil and feed the soil life.

“Through the Soil schools we learnt about tools to help in the decision making of managing the farm in a more biological way such as taking soil samples, reading and understanding a soil test, using soil tools, visual soil testing, rotation of crop and the importance of balancing the soil while also growing the crop,” he said.

The farmers now understand that there are other ways to farm rather than the conventional chemical farming being presently practiced. Farmers have started to use local materials for fertilizers such as seaweed, manure, old corals for lime. More important the farmers have started asking questions and sharing knowledge, something that was seldom practiced in the past.

Seeing the fruits of success from Tei Tei Taveuni, farmers in other parts of Fiji have called for the replication of the project, paving the foundation of sustainable farming in the Pacific.

The original artice is published by UNDP Pacific office in Fiji.