In September 2008, UNDP and UNEP entered into a partnership agreement to support the implementation of the Regional Strategic Action Programme (SAP) in the South China Sea, implemented through the Global Environment Facility (GEF) Small Grants Programme (GEF SGP). This partnership agreement was built upon a Joint Communiqué between the UNEP/GEF South China Sea Project entitled "Reversing Environmental Degradation Trends in the South China Sea and the Gulf of Thailand" (SCS) and the GEF SGP to support SAP implementation in the South China Sea. It was agreed that the SCS project and SGP would fund an equal number of projects, which would follow the priorities of the SAP, and that training would be provided to the SGP national coordinators regarding TDA and SAP process, as well as the regional priorities for intervention.

The Strategic Action Programme for the South China Sea identifies as the top regional priority the loss and degradation of coastal habitats; primarily mangrove, seagrass and coral reefs but also coastal lagoons, and coastal freshwater swamp forest. The second priority issue is management failures with respect to the linkage between fish stock and critical habitats. Among pollution sources domestic wastes were identified as the top priority; and nutrients as the priority contaminant. In the habitat component, targets have been set regarding the areas that should be protected and brought under sustainable management by set dates, usually 2015. For seagrass the targets are to ensure that 21 defined areas totaling 26,576 ha will be sustainably managed and that 7 new MPAs will be established in the region with a focus on seagrass. For mangroves 57,361 ha are to be transferred to National Parks and MPAs; 21,000 ha of deforested mangrove land are to be replanted; and 11,200 ha of degraded forest are to be subject to enrichment planting to increase the biodiversity. In the case of coral reefs 53,130 ha in identified sites are to be brought under sustainable management by 2015. 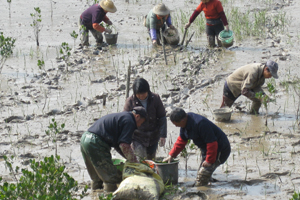 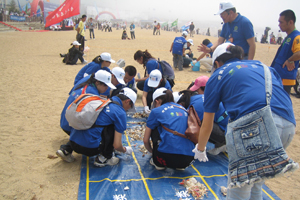 Implementing SAP at the Community Level

The focus areas of the 31 SGP projects are: