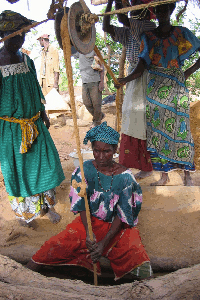 Replication and up-scaling are fundamental objectives of the GEF Small Grants Programme as it provides the opportunity to build on best practices and lessons learned and expand the reach and impact of its grant making portfolio. The voluntary and multi-sectoral National Steering Committees (NSC) of SGP in each country play a fundamental role in contributing to upscale and replicate the best practices identified in the portfolio. Given that these voluntary bodies often include several government sector agencies, UNDP, the private sector and a majority of civil society organizations, there are multiple opportunities for these stakeholders to support the replication and up scaling of the most successful projects and practices through their networks and contacts.

Over the years, GEF SGP has contributed to up-scaling of good practices through its linkages with and contribution to the development of GEF medium and full-sized projects by UNDP and other agencies that build on SGP experience. Another aspect that helps to promote the replication and up-scaling of good practices at the local level are SGP projects that become demonstration sites of innovative methodologies or technologies and where other communities, government officials and even private sector companies go to learn from the experience of these communities. Many countries have one or more projects that have become demonstration sites and that have helped replicate similar projects in neighboring communities. In Uruguay, for example, a biogas project initially implemented with local dairy farmers has now been replicated in several other communities, municipalities, and regions, following the successful testing of the renewable energy bio-digester technology. As a result, the Ministry of Agriculture, Livestock, and Fisheries is implementing two large projects on productive rural development and adaptation to climate change with funding from the Inter-American Bank and the World Bank, respectively. These projects have incorporated SGP overall lessons as well as the bio-digester technology adapted and validated by SGP, which has now been nationally disseminated through the publication of a manual on its construction and use.

In some countries, where GEF SGP has more mature portfolios, the country teams have been replicating and up-scaling successful projects by providing follow-up grants to GEF SGP grantees that have demonstrated excellent results in their first project and have organized themselves to upscale their impact into other communities. In India, SGP developed guidelines to facilitate repli¬cation and scaling-up and has applied them for second phases of 30 projects using co-financing obtained by the programme from government, donor, and private sector sources.