In a small house in the Saramacca District, one hour away from the Surinamese capital of Paramaribo, Robert Kriontani welcomes you to his family farm. He grows aubergines, cauliflowers and spring onions, three common products of Suriname's diet. However, Robert's crops are not common; he has chosen not to follow the usual way of farming.

The use of fertilizers is spread among Surinamese farmers. The uncontrolled use of these substances produces soil erosion, land degradation, and is a threat to the environment. Organic agriculture is one of the answers to land degradation for it maintains a healthy soil and helps the restoration of sustainable ecosystems.

Robert has chosen not to use fertilizers and pesticides as a result of being part of a project supported by the GEF Small Grants Programme. For five years he has been involved in an initiative promoted by The Caribbean Institute, a community based foundation that pursues promoting organic agriculture as an answer to land degradation and the use of persistent organic pollutants. 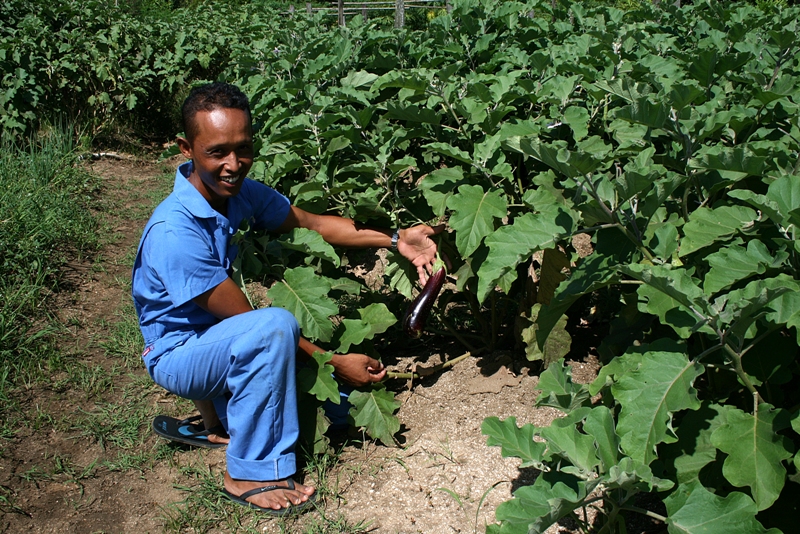 Five years ago, Robert read about the project and joined an information session. "My step father had a farm and I learned the farming basics from him", explains Robert, "I am always eager to learn and I found the project really interesting so I joined". For three years he has been part of a group of ten farmers and he has received trainings twice a week about organic farming. "I learned the different cycle's plants have, everything about natural fertilizers, and how to know when a plant is sick," he says. "My aubergines, cauliflowers and spring onions taste different, they are bigger and juicier and buyers notice the difference", explains. The results are so good that he has bought part of his brother's land to expand his farm.

A major component that has guaranteed the success of the project is that farmers don´t have intermediaries to sell their products. Before, they didn't have a direct access to Paramaribo´s markets. Now, the project has its own transportation vehicle and farmers go by themselves every Sunday to sell the products at the Kwattaweg market. The demand of organic products has increased and sometimes they can´t cope with it.

What is next? "We are already designing our own brand, and we are planning to start selling to supermarkets in Paramaribo", says Robert proudly.