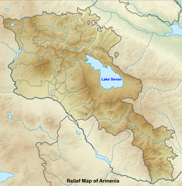 Lake Sevan is the largest fresh water lake in the Southern Caucasus. The total surface area of its basin is about 5,000 km2, while the lake itself covers 1,250 km2. Since the 1930s, unsustainable utilization of lake water for irrigation and hydropower generation disrupted the ecological balance of Lake Sevan. Due to the heavy industrial exploitation between 1933 and 2000, the water level dropped by 19.6 meters and the volume decreased from 58.5 to 32.5 billion cubic meters, a decline of almost 45%.

This hydrological system change severely impacted the lake's biodiversity, particularly the unique "Sevan trout" (Salmo ischchan kessler), which is registered in the Red Book of Animals of Armenia and the former Soviet Union, and is considered endemic to the lake. As a consequence of the desiccation of spawning grounds, two out of four Sevan trout subspecies – the winter bakhtak (Salmo ischchan ischchan) and the bojak (Salmo ischchan danilewskii) – have disappeared completely and are now considered extinct according to the criteria of International Union for Conservation of Nature (IUCN). The other two subspecies spawning in rivers – the summer bakhtak (Salmo ischchan aestivalis) and the gegharkuni (Salmo ischchan gegarkuni) – which are classified as Critically Endangered according to the IUCN criteria, have managed to survive because of artificial reproduction.

To ensure conservation of these two subspecies, the Global Environment Facility Small Grants Programme (GEF SGP), implemented by UNDP, supports a restoration project to rehabilitate the ecosystem and biodiversity of Lake Sevan. The project "Creating preconditions for protection and reproduction of Sevan trout (Salmo ischchan kessler) through environmental awareness building in a number of communities of Lake Sevan watershed and establishment of a fishery in Geghhovit community" has been funded under the Biodiversity focal area, with project activities under implementation since November 2011. This initiative aims to establish a small-scale fish hatchery in the Geghhovit community of Gegharkunik region, where these two subspecies of the Sevan trout will be farmed and five to ten thousand juvenile fish will be released to Lake Sevan and the basin's rivers annually.

Global Eco, a community-based environmental organization, which receives significant support from the community members, local administration, as well as other partners, is the GEF SGP grantee and has spearheaded this project and supported its implementation at the local level. The area identified for project implementation is located 9-10 km south of Lake Sevan and about 2,000 meters above sea level, with the fish hatchery situated at a distance of 500 meters from the interstate road. All of these factors provide great potential for ecological, ethnological and agro-tourism development as a means to stimulate biodiversity friendly enterprise in the region. In this regard, the project will promote ecologically clean agricultural products offered by community residents, and establish an amateur fishpond to attract eco-tourism. "This initiative will certainly help to solve social problems of the community and return trout to Lake Sevan" noted Mr. Vardan Poghosyan, head of the Geghhovit community.

Currently, the establishment of the hatchery is in progress and will be completed by the end of 2012. The fishery complex established by the project includes an incubation facility with relevant fish species, external fry raising pools, as well as the amateur fishing pond with non-endemic species. Release of the first group of juvenile fish to the basin's rivers and Lake Sevan is scheduled for Fall 2013.

Apart from global environmental benefits attained from rehabilitation of endangered endemic species and restoration of the fish stock of Lake Sevan, the project is also contributing to the improvement of local livelihoods. Specifically, the project has helped create 10-15 temporary and 3-5 permanent jobs, provide the fishery outflow water to 30 community households for irrigation, and create alternative sources of income through promotion of eco-tourism services. Furthermore, the project strives to increase understanding among the communities of the importance and value of biodiversity at the local level as well as increase knowledge on biodiversity-friendly livelihood practices.

The project substantially complements the government's environmental policy and strategic objectives and serves as a practical model that creates prerequisites for sustainable management of biological resources and poverty reduction at the community level.

Hovhannes Ghazaryan, National Coordinator, GEF SGP Armenia, email: This email address is being protected from spambots. You need JavaScript enabled to view it.