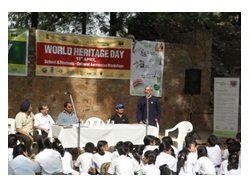 To mark the World Heritage Day, 18th April, and World Earth Day, 22nd April the GEF Small Grants Programme in collaboration with the host institution Center for Environment Education (CEE) implemented a week-long event, extending from the 18th until the 25th April, at Qutub Minar—a UNESCO World Heritage Site in New Delhi. The week-long event was aimed at raising awareness and sensitizing youth on various environmental issues while raising appreciation for Indian culture and heritage. During the program 50 fruit trees were planted at a UNESCO World Heritage Site, other 100 fruit trees will be planted during the rainy season.

Children and youth were educated on climate change issues, strongly promoting the idea of "low carbon lifestyles", for which a toolkit was developed to measure energy savings, costs and carbon savings (available for download at www.sgpindia.org). Through a partnership with Intel, the GEF SGP will pursue this program further and work to install carbon calculators across 1200 schools in India, reaching out on pilot basis to nearly 120,000 students. Furthermore, ND-TV used the schools' platform at Qutab Minar to launch their Annual Greenathon Event—a 1500km run from Delhi to Mumba. The CEE, GEF SGP and its partners extended their support to Milind Soman, the famous bollywood star and actor during his run he stopped at 11 spots along the marathon path were GEF SGP partners were involved in forest honey extraction, tree plantation, water harvesting, biogas units, show casing the making of bird-nests to save the house sparrow from extinction and recycling of water hyacinth. A total of 1100 students and 61 teachers from 31 schools took part in this week-long event, on a rotational basis. 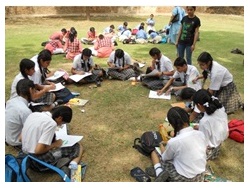 Children and teachers who participated in any of the activities produced written pledges for the conservation and the protection of biodiversity and the sustainable use of resources. By the end of the week, school children and teachers produced approximately 25,000 written pledges for environmental conservation. Nearly 2 million pledges to protect local biodiversity will be taken up by 10,000 schools and NGOs, with the support of the GEF SGP, CEE, NGOs and local institutions, and will be showcased at the 11th meeting of the Conference of the Parties (COP 11) to the Convention on Biological Diversity (CBD) scheduled to be held in India in September 2012.

This event was made possible through different partnerships including the National TV channel ND-TV, the Archaeological Survey of India (ASI), Ministry of Environment and forest (MoEF GOI), and the Department of Environment of the Government of India and the Local government in Delhi.