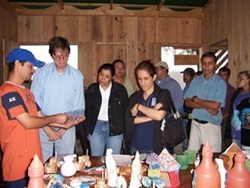 February 21st 2006 the UNDP country office in Nicaragua awarded the GEF Small Grants Programme country team a diploma of
recognition for the outstanding work it has been doing in the country. UNDP Nicaragua has showed increasing interest and support for work of the SGP in the country, taking part in project visits and by co-financing projects through TRAC funds.

At the end of 2005, the resident representative (RR) of the UNDP, Mr. Alfredo Missair, visited the project "Rural Communitarian Ecotourism in La Garnacha (NIC/04/03)". La Garnacha is a community with 20 families living in the protected area of Tisey Estanzuela. The SGP grant of 30 000 USD helped the community provide eco-tourism services and generate income through providing guided tours, renting out shelters and horses, and selling products to tourists. 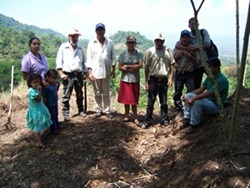 The deputy resident representative (DRR), Mr. Jafet Enriquez, visited the project "Local Alliances for Ecotourism Development (NIC/04/02)" in December of 2005. The project helps protecting a natural reserve in Datanli hill' which us under heavy pressure from the large population living the area. The project built alliances between local organizations that were interested in developing rural communitarian ecotourism as an economic alternative. In addition to the SGP grant of 6,746 USD, UNDP Nicaragua co-financed the project with 23,000 USD from its TRAC funds.

Both the above mentioned projects were represented at the Rural Communitarian Fairs in Costa Rica in 2004 and 2005 thanks to support from UNDP TRAC funds. 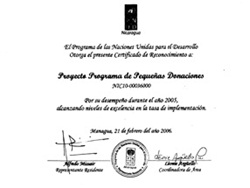