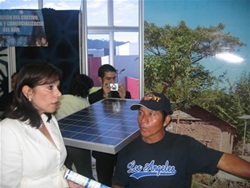 Three SGP grantees shared their experiences with other CBOs, development organizations and the president at El Salvador's first national knowledge fair. The SGP funded community groups' experiences of addressing global environmental concerns while also combating poverty and empowering members through capacity building received much attention both at the fair and in the media coverage of the event.

Three SGP grantees participated in order to share their experiences: 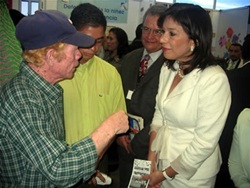 During the inauguration of the fair, grantees explained to the acting President of El Salvador, Vice President Ana Vilma de Escobar, how they applied their knowledge and used local actions to improve their livelihoods, while at the same time contributing to local and global environmental sustainability (See Photos).

The knowledge fair also offered the possibility for participants to learn form each other, network and identify opportunities for collaboration. The Méndez Island Community signed two partnership agreements during the fair, one with a community-based organization and the other with the Inter-American Institute for Cooperation on Agriculture (IICA).


The SGP grantees' experiences received much attention from all the 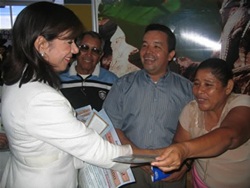 stakeholders that attended to the fair, and were awarded diplomas recognising the outstanding effort they are making in their local communities.