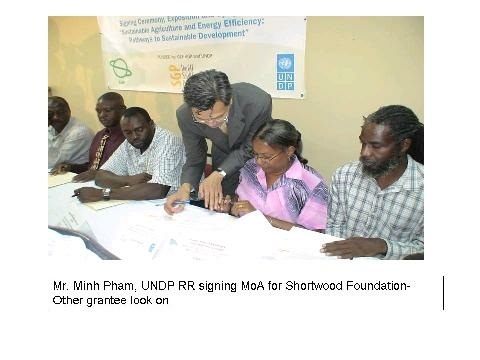 The SGP was officially launched in Jamaica in June 2005. To observe the 3rd Anniversary of this momentous event we hosted a forum that brought together GEF Implementing agencies, Government Representatives, past and current grantees, donor agencies, NSC members, academia and the media, among other stakeholders. In the first session we presented the accomplishments of the programme to date, as well as made appeals for continued support and co-financing. This was very well received. We also informed the audience of the UNDP/GEF CBA project that is being implemented using the mechanism of the SGP.

We used the occasion to sign 7 new MoAs, which was highly praised by the RR, GEF Focal Point as well as the keynote speaker the Permanent Secretary in the Ministry of Agriculture and Lands. The event was extensively covered by the media (over 14 media houses attended).

While the caption gave kudos to the UNDP, the body of the article acknowledged the GEF. 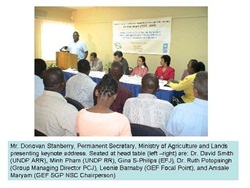 In the afternoon we hosted a symposium on sustainable agriculture, which showcased among other things lessons learnt from projects funded by SGP (one of which-Walkerswood- you visited in October 2007). We had representation from a number of very influential local, national and regional agencies, as well as a number of grass roots community groups. There was unanimous endorsement of our plans to formalise a draft paper on sustainable agriculture out of this session, which will be peer reviewed and presented to the Ministry of Agriculture and the Rural Agricultural Development Authority (RADA). This will serve as a blue print for policy and user guide of protected and organic agriculture in Jamaica.

Both events were complemented by displays mounted by SGP grantees, the RADA, and the Petroleum Corporation of Jamaica (PCJ). The latter show cased among other things, outcomes from a UNDP project focussed on energy efficiency in hospitals and schools. The UNDP very kindly co-financed the event, thanks for your continued guidance on how to engage multiple stakeholders. 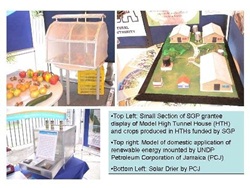