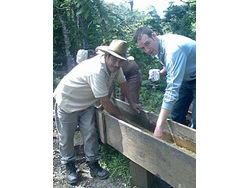 Managua, Nicaragua: When I started my UNV volunteer intern assignment about eight months ago, I had some theoretical knowledge about the environment, but knew very little about the tourism industry. In these months I have to say that I had the opportunity to learn much about both of these fields. I became conscious of the importance of preserving the environment and now understand that tourism, managed in sustainable way, can be an important tool in aiding this preservation.

Having one of the highest degrees of biodiversity in the world, Nicaragua has recognized the vital role its natural resources can play in its development and in the well-being of its people. However, besides the significant efforts that are being made to preserve the country's flora and fauna (21.8 percent of its territory lies in protected areas), many local species are in danger of extinction.

One of the main reasons for this vulnerability is, of course, poverty. In fact, Nicaragua is among the poorest countries in the Americas and especially in rural areas of the country most people live below the poverty line. Finding the link between poverty and the loss of biodiversity is simple: the small producers inhabiting rural Nicaragua need firewood to survive, and have no other option than to find it in the forest.

Considering that deforestation is extremely harmful to biodiversity we quickly understand that by tackling poverty we have a chance to kill two birds with one stone (please don't take this literally here!). When it comes to protected areas the situation is even more difficult for the residents (at least those small producers who have not sold their land) as they are not allowed to cut wood, or to expand their arable land. This makes them highly vulnerable to poverty and everything that comes along with it.

As a UNV volunteer intern I'm supporting the UNDP Small Grants Programme. This is a small office aiming to deliver global environmental benefits in the Global Environment Fund's (GEF's) focal areas which include: biodiversity conservation, climate change mitigation, protection of international waters, prevention of land degradation (primarily desertification and deforestation), and the elimination of persistent organic pollutants through community-based approaches.

In our office I am responsible for rural and community-based tourism, which, thanks to a donation from the Grand Duchy of Luxembourg, has become a rather consistent part of the programme. Rural and Community-based Tourism (RCT) is a growing phenomenon in Nicaragua and represents an interesting alternative to more traditional approaches to tourism which we can observe in neighbouring countries with more experience in the tourism industry.

The idea behind RCT is that the benefits go to those people living in the areas around the tourist attraction and that it has no or just little impact on the environment. In Central America many mistakes have been made with tourism in the past. People sold their land for little and now find themselves being employed by investors coming from outside, who do not give them any social security. 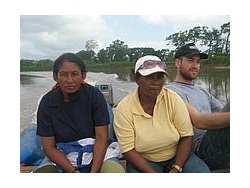 In order to avoid these negative impacts on Nicaragua's population, the Small Grants Programme finances small community-based approaches to tourism, targeting poor communities in protected areas. It is fascinating to see how the beneficiaries slowly understand the concept of tourism and the importance of taking care of the environment, which now represents an alternative source of income.

I followed many small community-based organizations throughout the entire selection process, organizing workshops and helping them to write project proposals. Now that the projects have started I monitor their development. Through this monitoring process I have the opportunity to travel around the country and in doing so I get to know the many beautiful hidden corners and different cultures of Nicaragua. These reach from indigenous communities situated along the Coco River bordering Honduras, to small villages around Apanás Lake.

Of course, RCT is a challenge and one cannot expect to have the same results as with private investments, but this challenge is part of what makes this assignment so interesting to me and many projects seem to be great successes.

I consider myself very lucky to be able to gain a lot of valuable practical experience with one of the most down-to-earth approaches of the UN and give my contribution to the people and biodiversity of Nicaragua. This year has definitely changed my view on many things and being a tourist will certainly never be the same again.