A BAY IN JAMAICA COMES BACK TO LIFE
Print

When high school principal Mervyn Tennant retired and moved to the fishing village of Oracabessa Bay on Jamaica’s north coast, he had to witness a regular and heartbreaking sight—poachers killing the critically endangered Hawksbill sea turtles and stealing their eggs.

“Poachers would wait until she laid her eggs then turn her on her back, kill her and cut her from her shell", he says. “They killed every turtle and dug up all the eggs." 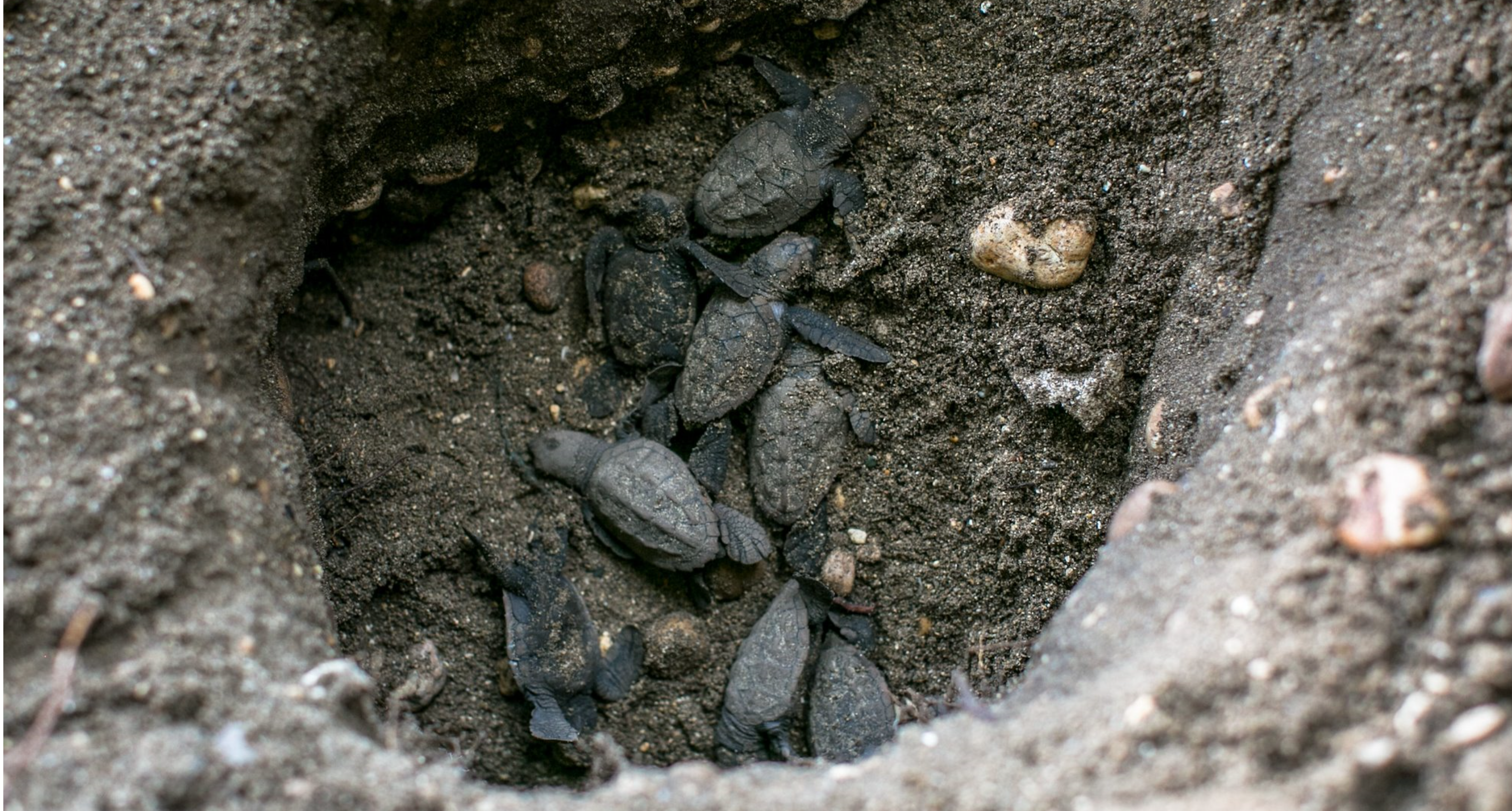 Prized on the black market for their aphrodisiac qualities, sea turtle eggs fetched much more than an average wage in the community. “If they worked on a building site that would be the equivalent of a month's pay,” Mr Tennant says.

With sea turtle populations on the increase, local and international visitors are coming. 5000 to 6000 visitors per year witness the sea turtles,” resulting in income for the OBFS. On tour, visitors help dig up hatchlings from their nests, wash the sand from their eyes and release them so they can make their trek into the sea. Oracabessa Bay is where the author Ian Fleming created James Bond, probably the worlds’ most famous fictional spy. His house, ‘Goldeneye’ is now a luxury resort, attracting visitors from all over the world.

However until recently the seemingly idyllic landscape hid a brutal reality—coral reefs were dying off, and fish numbers had dropped precipitously. The tourism and fishing industries were threatened.

Mr Tennant is one of the many residents of the village who decided to fight back to protect not only the turtles, but entire community’s ecosystem. 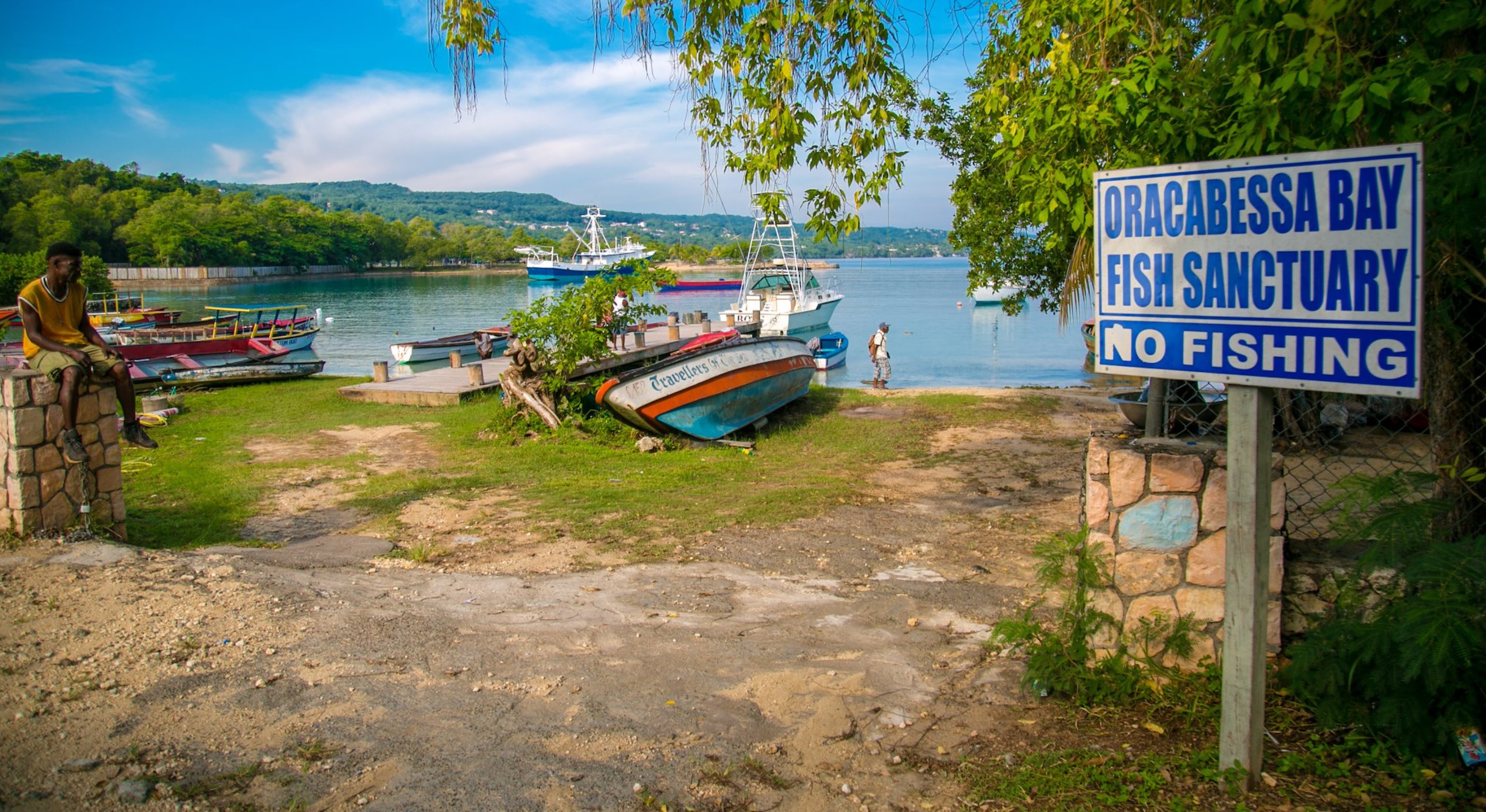 Fish sanctuaries are strictly no fishing zones. In 2011 the National Environment and Planning Agency (NEPA) had painted a grim picture for Jamaican sea life. It reported that coral reefs were 91 percent degraded and had been taken over by fast-growing algae. Fish numbers were low and virtually all sea turtles and their eggs were being poached on the prime nesting beach. Fishers, marine biologists, hotel owners united not only to restore corals, fish stock and sea turtles, but also to establish sustainable livelihoods and a community capable of living in harmony with nature.

With support of the Global Environment Facility’s Small Grants Programme (SGP) and UNDP, the organization set out to preserve the marine ecosystem in the 74-hectare sanctuary and to bring back fish, sea turtles and coral.

“We search for dying coral colonies. We take the best coral pieces to the undersea coral nursery, cut them in bits and hang them on vertical lines, 15 feet apart supported by moorings and buoys. After 7 to 8 months we tie them to the reefs with cement (using a technique adapted from Belize).” - Lenford Dacosta, fisher and coral gardener 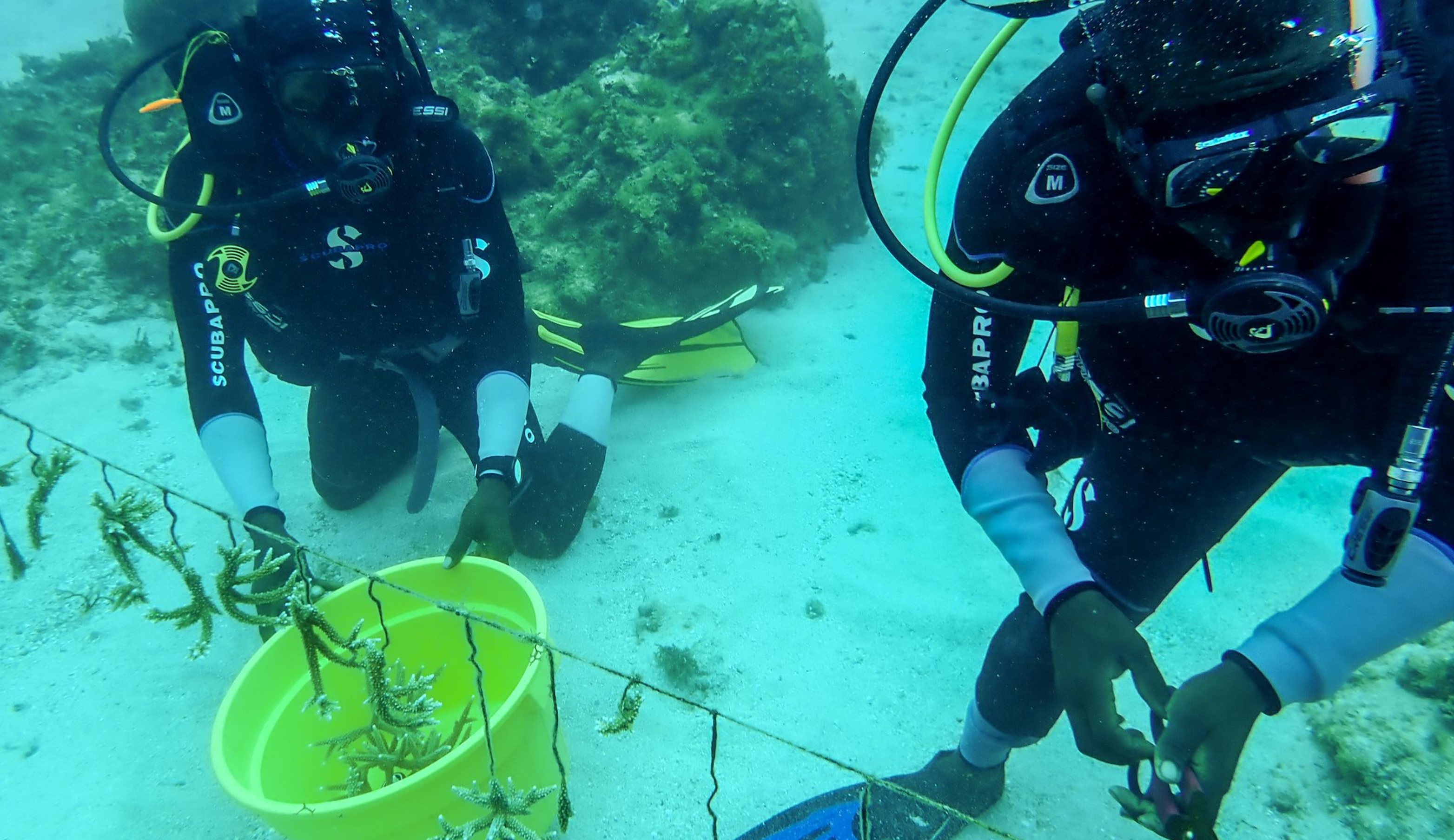 Coral reefs are in a poor state in Jamaica according to the Status Report on Coral Reef Health. The 2018 report warns that surgeonfish and parrotfish that eat coral-harming algae, as well as commercial fish numbers, are at critical levels, declining by an average 22 percent. Meanwhile, harmful algae on reefs is still too high, rising six percent since 2017. Unsurprisingly, no reef scored ‘good’ or ‘very good’ in this latest index. The Commander Reef in the Oracabessa Bay Fishing Sanctuary was only one of five out of 28 ranked as fair. All others were poor or critical.

Regular patrols help secure and sustain livelihoods that depend on the natural resources and biodiversity of the Bay. Fishing is an important source of income for Jamaicans. A recent report by the Food and Agriculture Organization indicates Jamaica’s fisheries contribute directly and indirectly to the livelihoods of more than 100,000 people, or nearly five percent of the population. 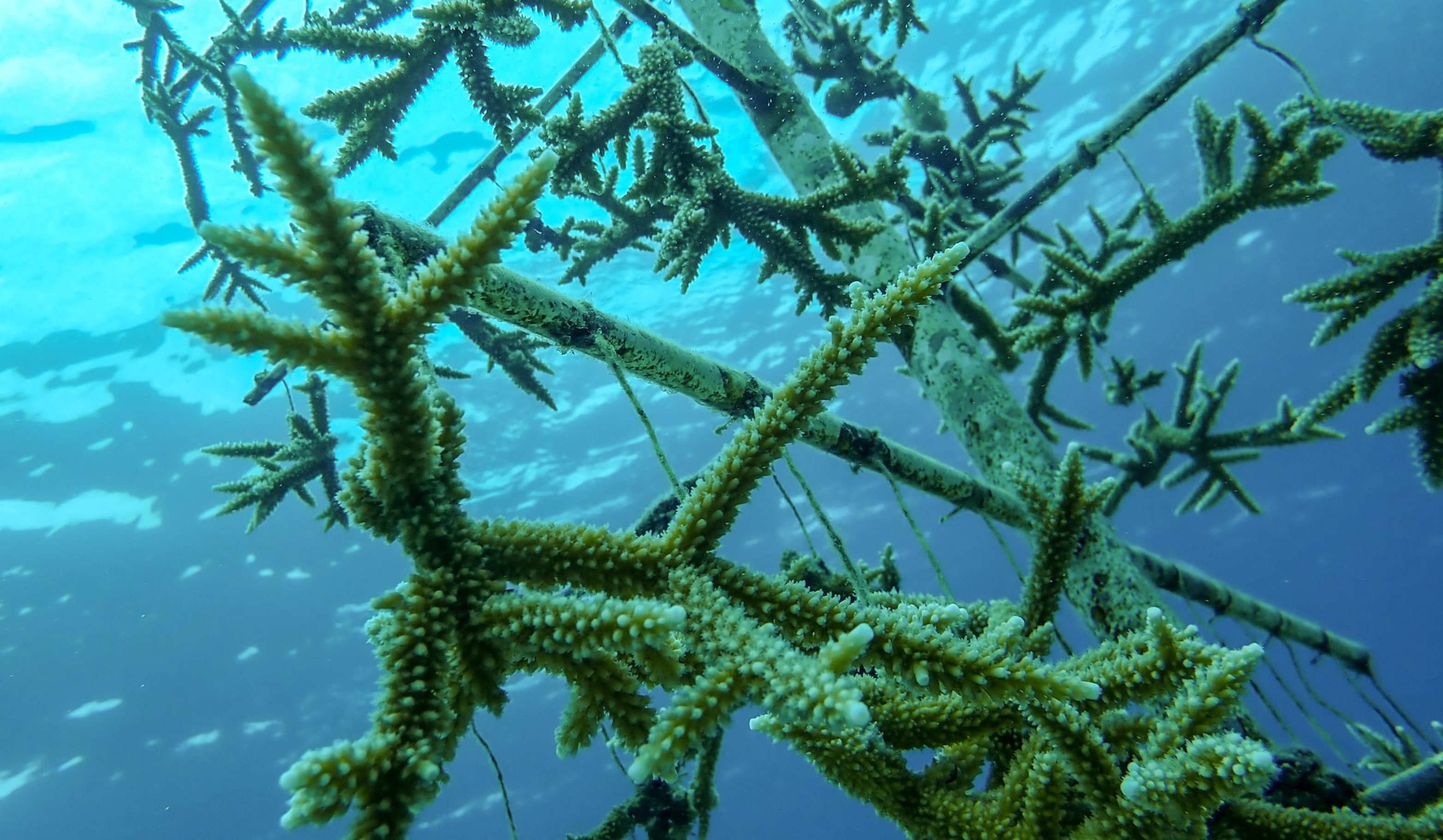 Travis Graham, Executive Director of the Oracabessa Bay Foundation would like to see momentum continue for all fish sanctuaries across Jamaica. He is calling on government to talk through solutions and alternatives to closure of the conch industry.

“We urge the government to work along with us so together we can find a solution to ensure the sanctuaries around Jamaica are protected, that they develop as they should, and leading to the development of other industries,” he says.

The success of Oracabessa is being replicated in other coastal areas such as Rio Nuevo, Reggae Beach and Page Beach.

“We are seeing more fish,” says fisher and Sanctuary Warden, Leighton Withworth. “Since we founded the sanctuary. It’s good. Bigger fish, more fish.” A Fisherman prepares his fresh catch that he caught outside the sanctuary.

“This is a real community run and community-owned initiative. It has attracted government and international partners. By establishing protecting the fish sanctuary and the habitats of species like the Hawksbill turtle, the project is also protecting the livelihoods of the local community,” said Hyacinth Douglas, National Coordinator of SGP.

Mervyn Tennant has been busy in his retirement. He’s helped to oversee the rehabilitation 13,000 square metres of the beach where Hawksbill sea turtles choose to nest. Apart from poachers, the turtles were threatened by debris dumped by a nearby river. This had caused sand to pile up, creating ponds which disturbed the nests, killing off the turtles. He knew that clearing the beach was an absolute necessity.

“With the tractor we bought from the SGP project we could push the sand to the back of the beach, so we got a better slope that would not collect water. Without this we would have lost 50 percent of our nests,” he says.

“It made a significant difference to what we do. We now have more turtles hatch on this beach than anywhere else in Jamaica.” 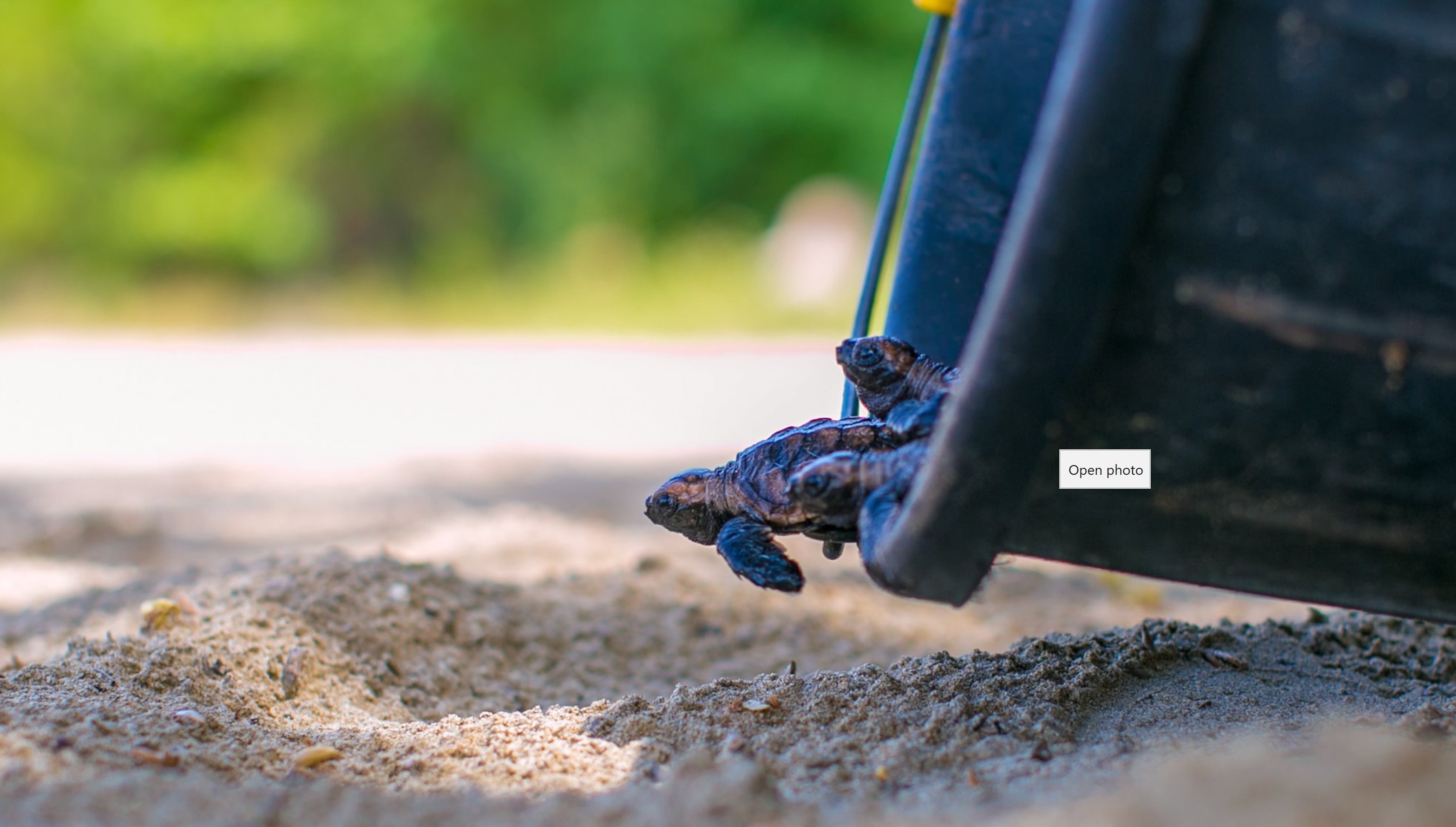 “This is a real community run and community-owned initiative. It has attracted government and international partners. By establishing protecting the fish sanctuary and the habitats of species like the Hawksbill turtle, the project is also protecting the livelihoods of the local community,” said Hyacinth Douglas, National Coordinator of SGP.