Declared extinct in 1948, the Jamaican Iguana was rediscovered half a century later in the Hellshire Hills. UNDP/GEF SGP’s strategic support to recovery efforts is now reaping major results in 2018. 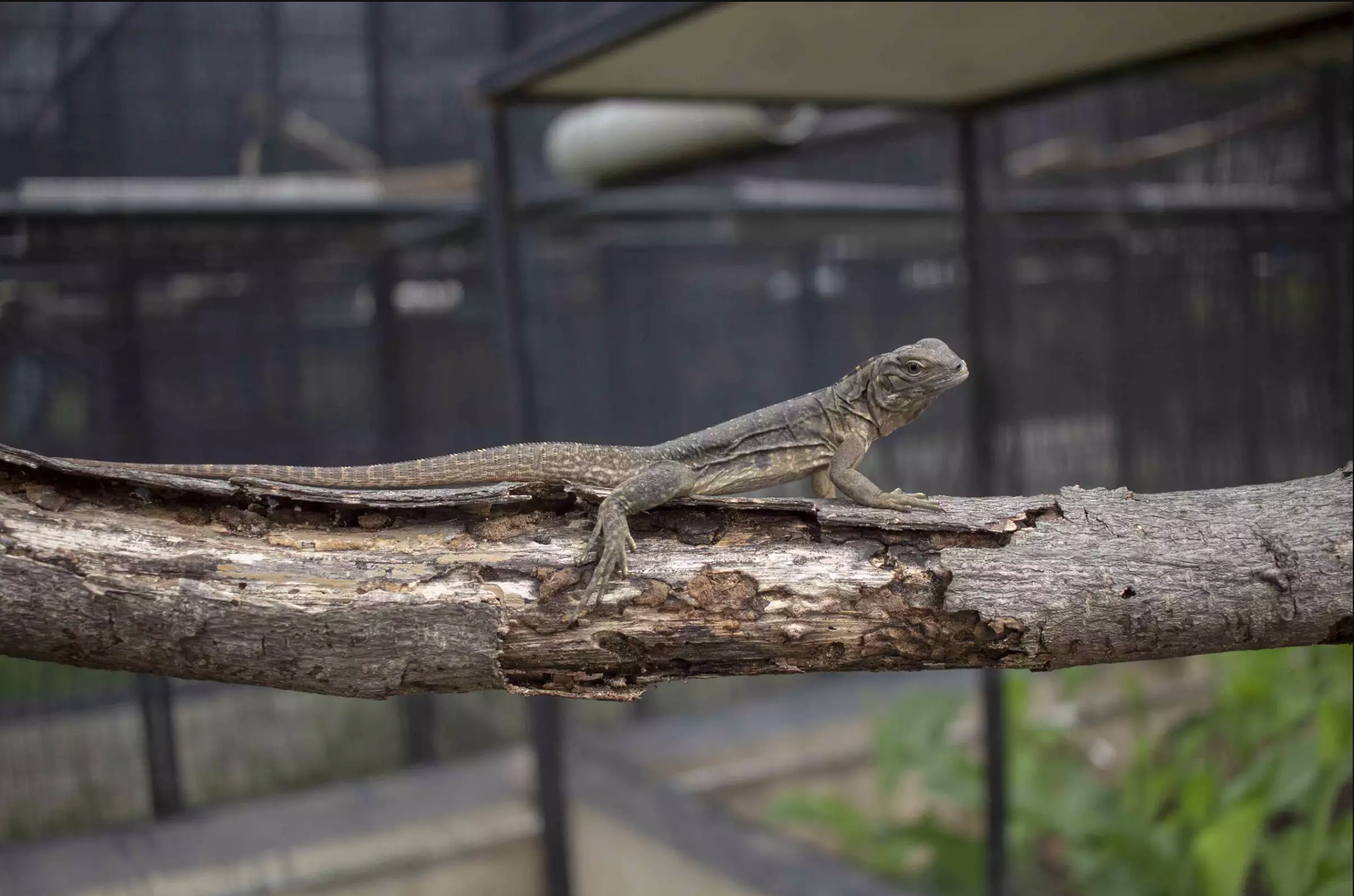 In 1990, Edwin Duffus, pig hunter, walked into Jamaica’s Hope Zoo in Kingston and handed over a rather large lizard to zoo keepers. He had been hunting hogs in the Hellshire Hills, when his dog ambled over with the live specimen in its mouth. The lizard turned out to be a Jamaican Iguana, (scientific name, Cyclura colliei), an endemic species long declared extinct – since 1948. The discovery sent ripples throughout local and international zoology circles.

This iguana is native to Jamaica and thrives in dry forest habitats, helping to maintain the forest cover that sustains the water aquifers on the south coast. 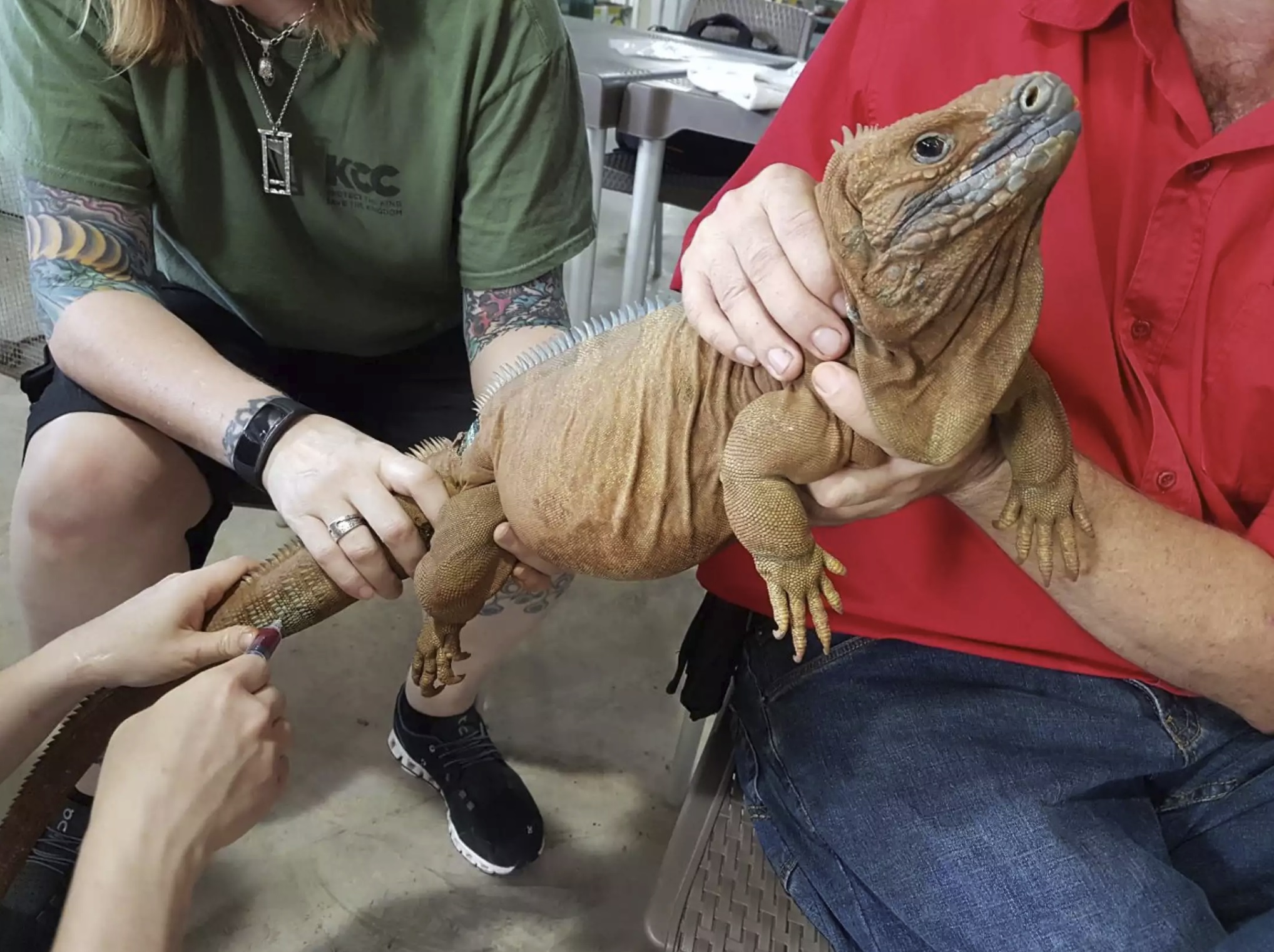 Hellshire Hills' biodiversity needs the Jamaican Iguana
The Jamaican Iguana – a ground dwelling, short stocky reptile with brown, grey and aquamarine colouration and a distinct cowl of loose skin at its neckline - is one of 27 reptile species endemic to Jamaica. It had long been a missing link in an incredible biodiversity chain that sustains Jamaica’s dry forests. “They eat fruits and vegetables, and when they poop, the seeds germinate and grow faster, so they add to the biodiversity of the forest. It is for this reason the iguanas were considered Jamaica's first farmers”, Loy Taylor Bloomfield of the Hope Zoo Preservation Foundation explains. 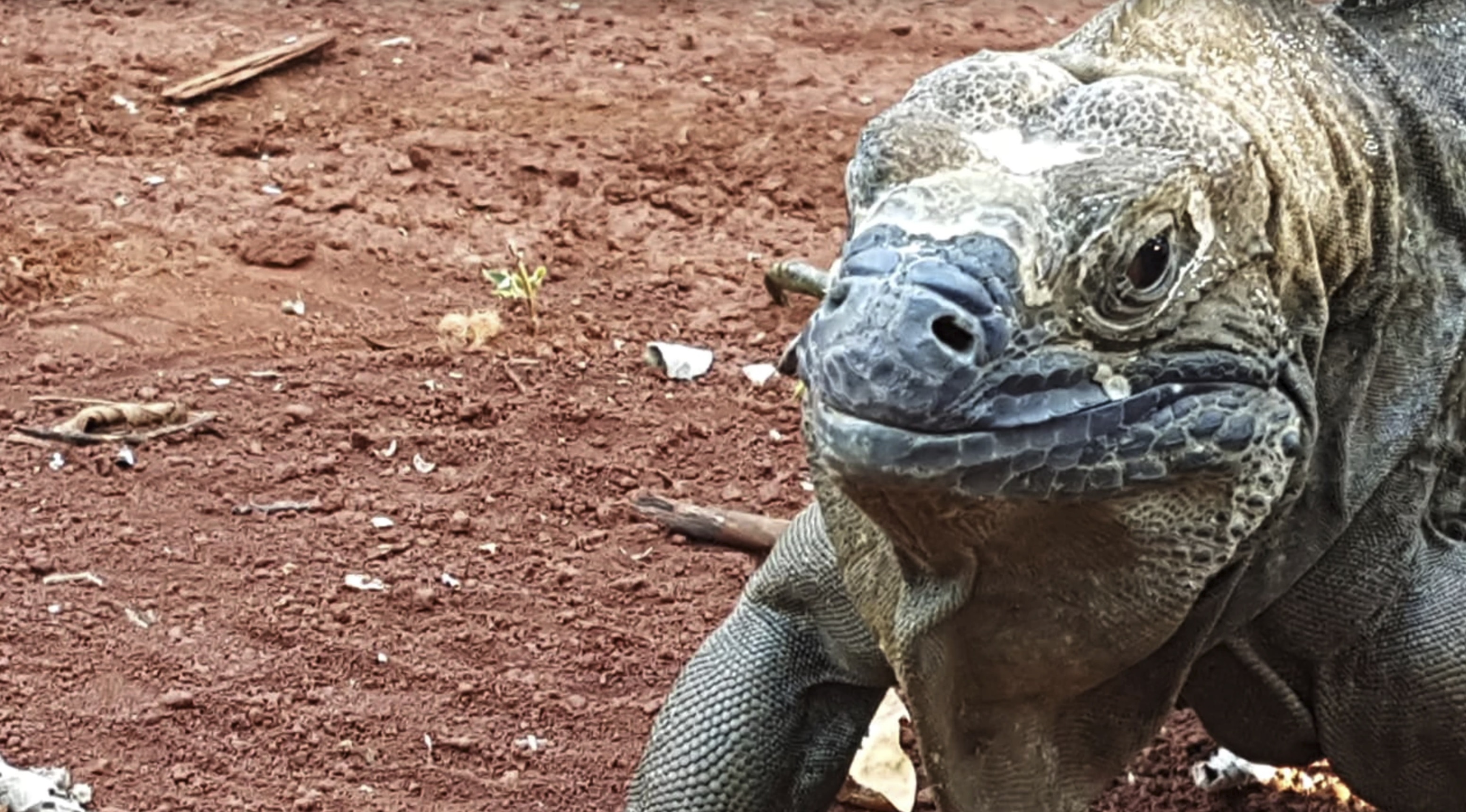 Adult Jamaican Iguana - a remarkably shy reptile with the personality of a dog. This species, endemic to Jamaica is fragile, and susceptible to attack from dogs, cats and mongoose.

The cultivator
Hope Zoo General Curator, Milton Rieback is more colourful in his description: “He is your cultivator, gardener of your dry forest habitat”. In a local experiment spearheaded by a graduate student, seeds which pass through the gut of an Iguana thrived far better than those sown by hand, the Zoo Curator clarifies.

This critical service to local biodiversity is carried out by Jamaican Iguanas on their current and only known habitat - the Hellshire Hills, a tropical dry forest region in southern Jamaica, described as “one of the last substantial areas of primary, undisturbed dry forest in the Caribbean” by the late University of the West Indies zoologist, Peter Vogel. Studded with cacti, shrubs and low deciduous trees adapted to low rainfall, Hellshire Hills juts above the densely populated community of Portmore, just west of the capital city, Kingston, covering more than 100 kilometres.

It is here that the Jamaican Iguana once thrived, after they were wiped out on another known habitat, the offshore isles called Goat Island and Little Goat Island. But over time, iguana numbers had been decimated in these hills by hunters, predators, and habitat destruction.

Jamaica's Forestry department confirms that dry forests like Hellshire Hills cover 4% of the island, and are a key component of Jamaica's forest ecology and economy, by helping to maintain the limestone aquifers which are an important source of ground water in the south coast. But these forests are increasingly under pressure from coal farming, developments and mining, which in turn poses a potential threat to the fledgling iguana population. 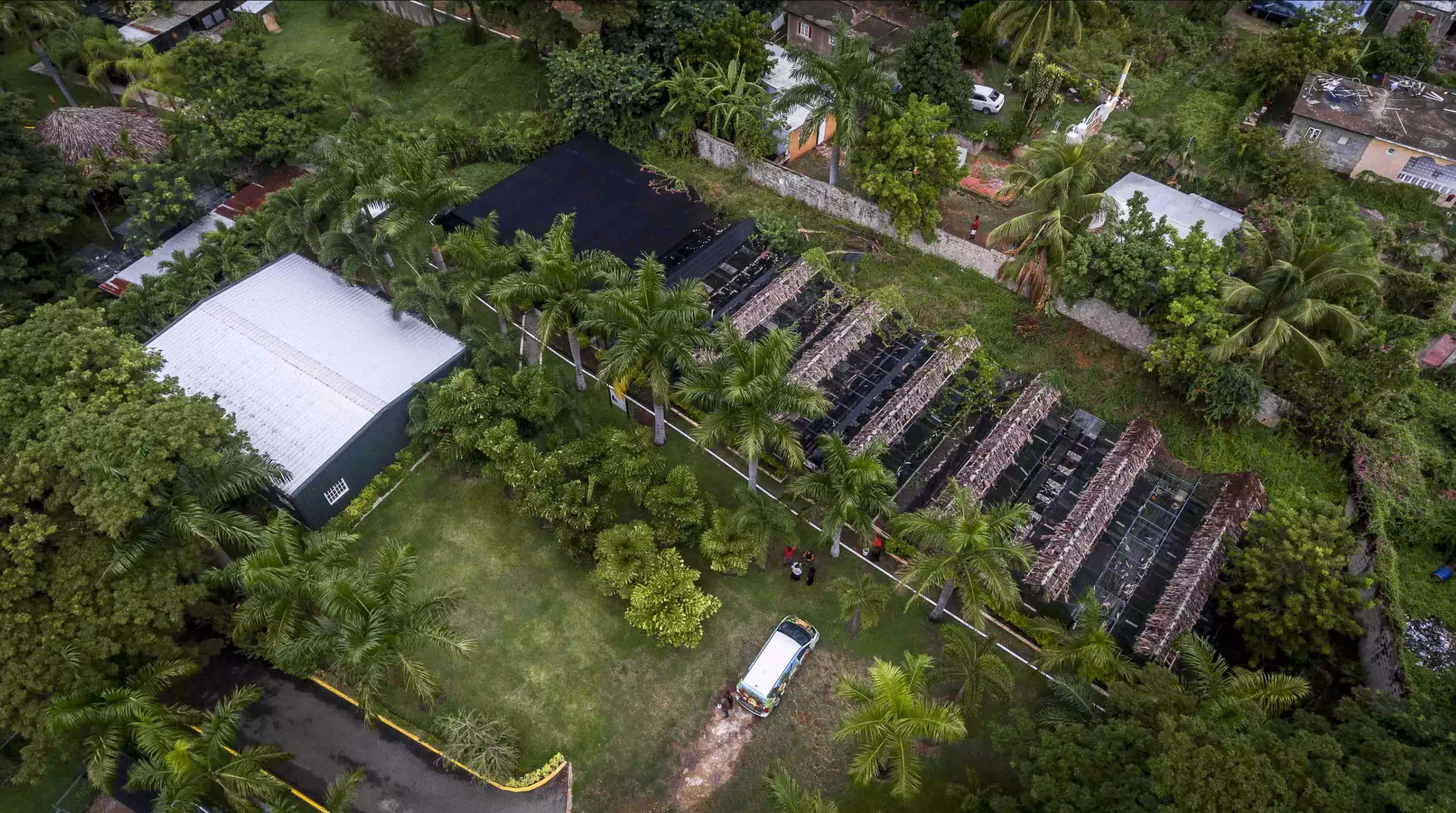 GEF SGP targets diagnostics and diets of the Jamaican Iguana
Understanding the importance of the Jamaican Iguana’s recovery to the survival of Jamaica’s dry forests, the United Nation Development Programme (UNDP)-implemented Global Environment Facility (GEF) Small Grants Programme got involved in 2012 in the then-16-year-old globally-heralded conservation effort known as the Iguana Head Start initiative. SGP’s 2012 intervention was also consistent with Aichi Target number 12 – aimed at restoring endangered species to their natural habitats. By then the International Union for Conservation of Nature (IUCN) had placed the Jamaican Iguana on its Red List of Threatened Species where it remains today listed as critically endangered.

GEF SGP National Coordinator in Jamaica, Hyacinth Douglas said the programme focused on a critical gap in the Iguana Head Start programme – boosting the diagnostic and medical care capacities of Jamaica’s Hope Zoo Preservation Foundation to ensure that healthier, stronger and more resilient adults could be released into the wild capable of surviving its dangers. “Our grant provided the enclosures as well as the diagnostic centre which is like a hospital or medical centre for the animals, where the iguanas are tested. It was imported as a prefabricated kit and installed at the Hope Zoo.” 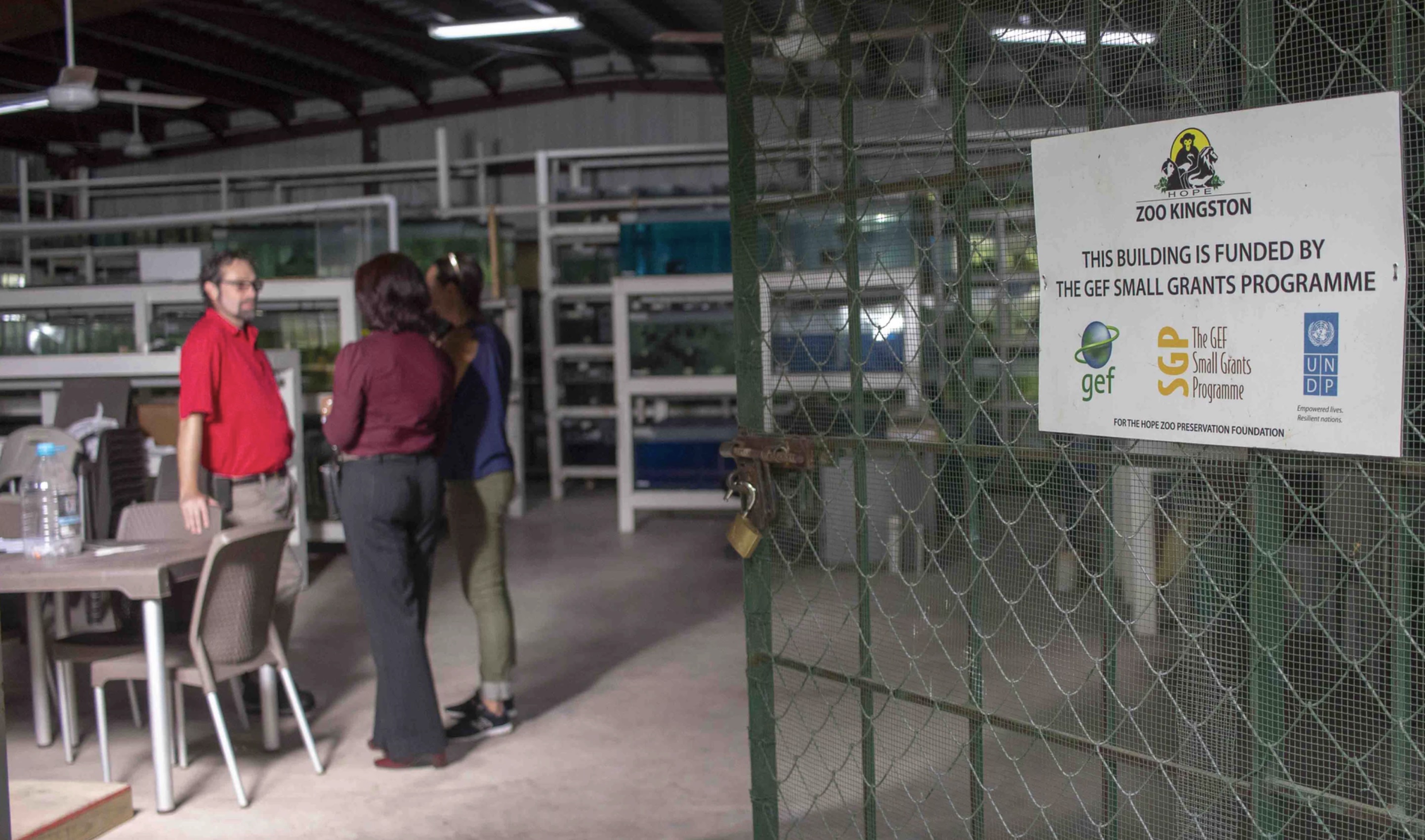 UNDP offers Six Signature Solutions in pursuit of a comprehensive approach to poverty eradication. This UNDP/GEF SGP project is typical of UNDP's portfolio of Signature Solution 4 projects (Promotion of nature-based solutions for a sustainable planet). The UNDP/GEF SGP- supported building is used to conduct biannual health screening of the iguanas including weighing, blood testing, measuring, and other physical examinations, Milton Rieback further outlines. These checks are critical to the health of the iguana population and to assessing their readiness to survive predators and other dangers in their natural habitat. Below 1 kg in weight, their chances of survival are not good.

The objective is to get the iguanas to a certain length, weight (1 kg and above) and health of nose, mouth, eyes and teeth. These indicators are signposts to the iguana’s readiness to return to the wild.

“When new animals come to the zoo they are quarantined and tested for diseases. We keep them separated for a while until everything checks out, then we put them in their cages - three or five per cage - and we feed them on a specialized diet. They are mostly vegetarians. they love greens so they eat very healthy. They eat stuff like callaloo, cabbage, kale, tuna (a type of cactus),”

Best health evaluations ever
The results of the programme have been very positive but even more so in 2018. All the health indicators are pointing in the right direction. “This is the best health evaluation we have had in history.’ Rieback confirms.

“We are now averaging 50 to 100 kilograms weight gain per month on the medium sized”. Previously, weight gains were not as remarkable, and in some cases, weight losses of 50 – 100 kg per month were recorded.

Growth trends of the iguanas indicate that release times could be positively shortened. With health indicators on the up, the numbers of habitat-ready adults released into the wild have doubled. “This year we were able to release a total of 69 individuals over two releases. In the past only one release has occurred per year and the average released was 30 to 35,” discloses Dr Stesha Pasachnik of the Iguana Head Start project.

Record breaking year
“This is a record breaking release" interjects Rieback. “Never in history have we released as many iguanas”. Both Rieback and Taylor-Bloomfield say these successes would not be possible without the diagnostic centre and the new diet supported under the UNDP-implemented GEF SGP project.

Since then some 400 iguanas have been returned to the Hellshire Hills but not all have survived, as invasive, predatory mongoose, feral cats, wild dogs and human activity continue to take their toll. That is why, Rieback says, they are focused on increasing the numbers returned to Hellshire Hills to offset losses, while reducing the turnaround time for releases and strengthening the resilience and readiness of iguanas to withstand the dangers of their habitat.

Today, there are about 250 to 270 iguanas, from hatchling to adult at the Hope Zoo, representing 50% of the world’s surviving population of the Jamaican Iguana, the Hope Zoo General Curator emphasizes. “Jamaica has done the hard work of bringing it to a point of a breeding population”, he says, now there is need to secure Goat Islands as a pristine natural habitat that can be sanitized from all predators and developed as a danger free zone for their restoration and eventual removal from the IUCN red list. 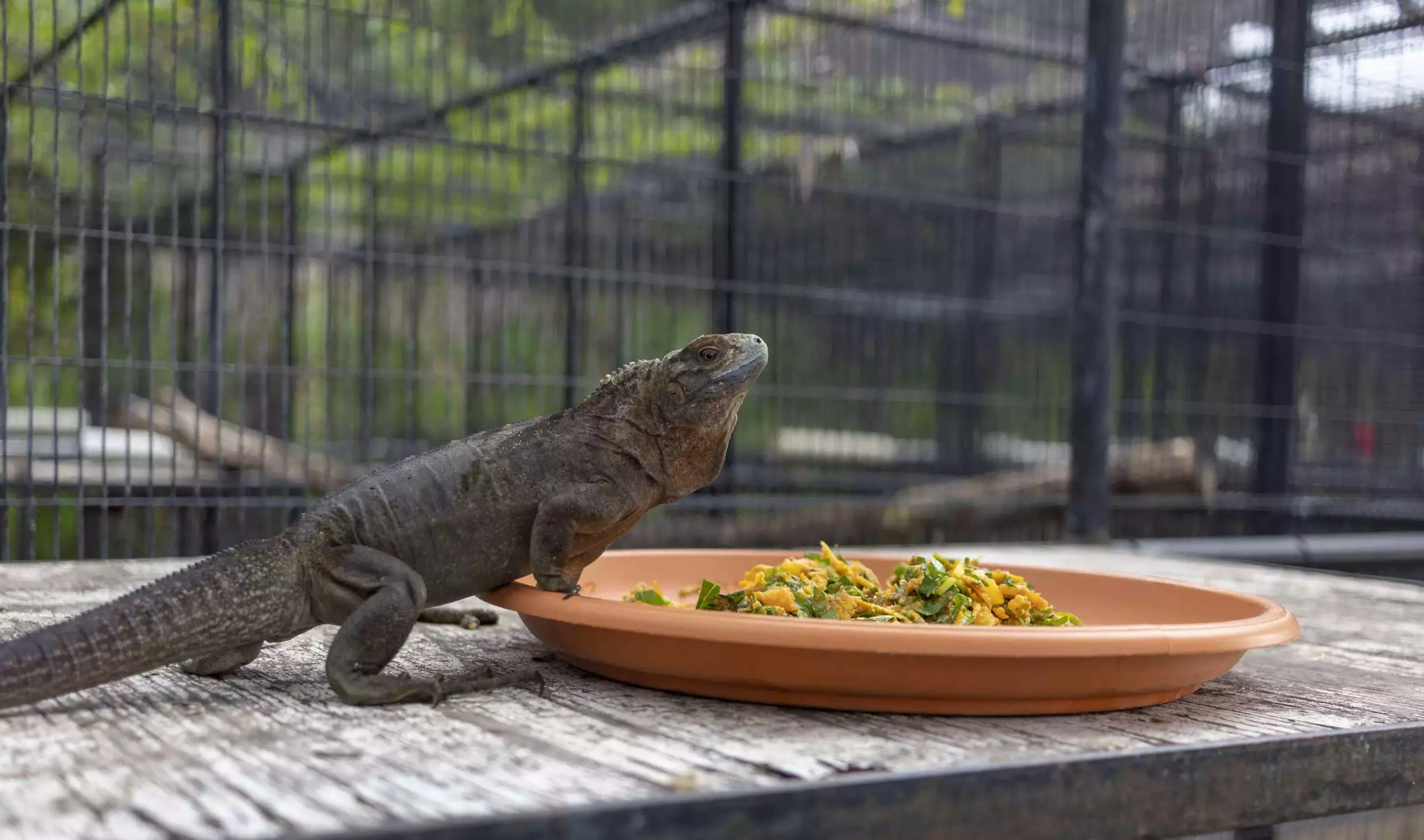 "This is like bringing the dinosaurs back. This is like Jurassic park"
He has one more wish: That Jamaicans would embrace the endemic reptile, understand their importance to south coast water supplies and stop harming them. He explains that Jamaican Iguana are vegan reptiles, tend to be intelligent, and possess personalities much like dogs. "Jamaicans don’t understand what they have. They see it as just another lizard”, he observes.

He makes a final explosive point to prove that Jamaicans just don’t ‘get’ the fuss about the Iguana Head Start project: “This is possibly one of the most important conservation programmes on the planet”, Rieback passionately declares. “This is like bringing dinosaurs back, this is like Jurassic park. You are looking at an animal that was (once thought to be) extinct. We are looking at a re-discovery, at a second chance”.

* This story was originally published by UNDP Jamaica -https://undpjamaica.exposure.co/back-from-virtual-extinction

Text by UNDP Communications Analyst, Gillian Scott, photos by Dominic Davis for UNDP JA and Milton Rieback of Hope Zoo. Thanks to the team at the Hope Zoo Preservation Foundation