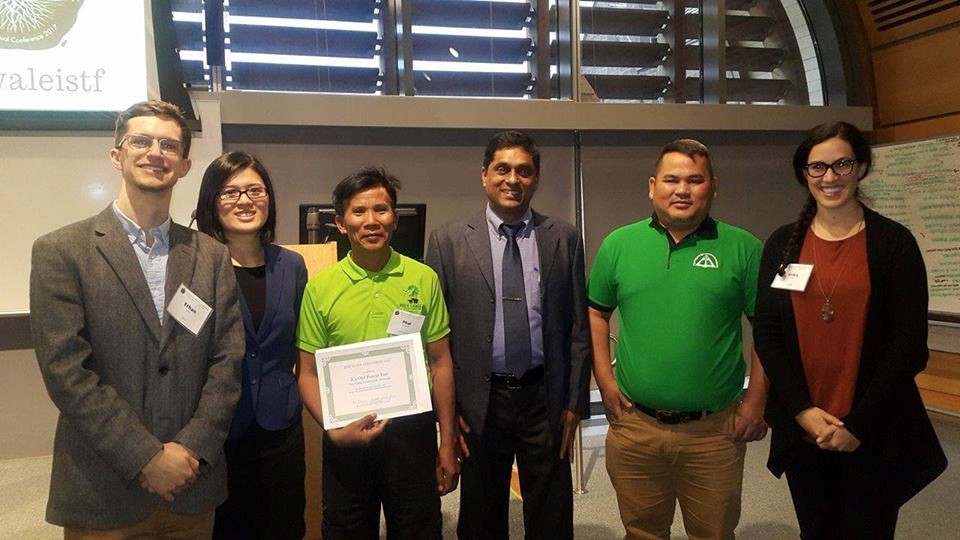 The Human and Environment Development Organization (HEDO), an SGP grantee in Sri Lanka, was selected as a finalist of the Innovation Prize organized by the Yale Chapter of the International Society of Tropical Foresters (ISTF) in the context of the 23rd Annual ISTF Conference that took place at the Yale School of Forestry and Environmental Studies (New Haven, USA) on 27th - 28th of January 2017.

The purpose of this annual prize is to honor outstanding projects that promote the sustainable use and conservation of tropical forests and suport the well-being of those living in or dependent on them. The theme for the 23rd Annual ISTF Conference was "Tropical Forests in a Connected World: Collaborative Solutions for a Sustainable Future" and brought together individuals from various disciplines and sectors to discuss, exchange ideas and collaborate on the best solutions towards sustainable tropical forests. With support of the Small Grants Programme, the Sri Lanka Environment Exploration Society (SLEES) nominated HEDO for the prize and was selected as one of the two top finalists out of 25 organizations from Latin America, Africa and Asia. As a finalist HEDO was invited to present their work on biogas at the ISTF Conference.

The rubber industry is often associated with a number of environmental problems, mainly GHG emissions, logging for firewood, and water pollution from effluents, amog others. Smallholders do not consider the environmental effects of the plantation, maintenance or production of rubber, mainly due to financial constraints and lack of technical knowledge. To address these issues, HEDO, with the assistance of the officers of the Rubber Research Institute and SGP, implemented a project to reduce the green house gas emissions associated with the rubber industry in the midland forests of Kegalle District through the use of biogas technology. 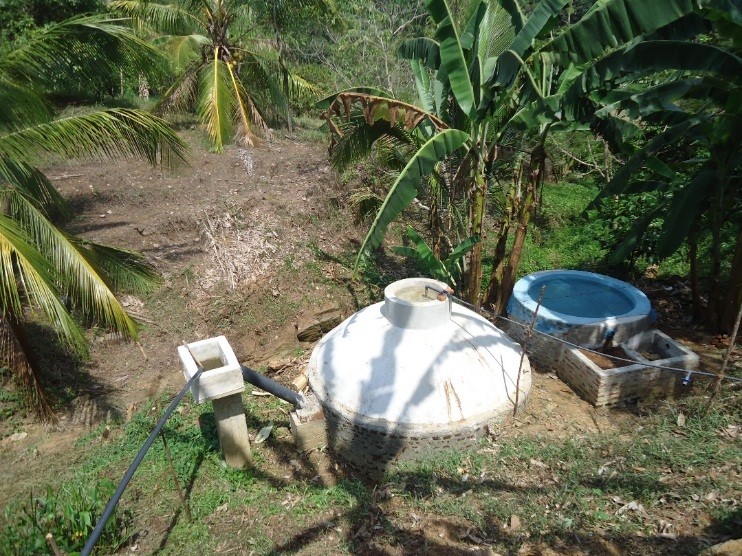 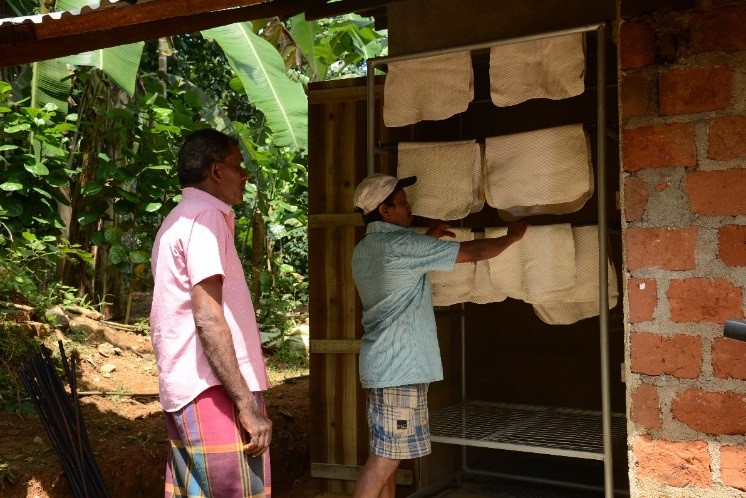 In the Warakapola Local Authority area of Kegalle district, where the project activities were undertaken, around 97% of the smallholders use small centralized low energy efficient smoke houses for producing ribbed smoked sheets (RSS), which are darker and graded as grade 4 and 5. These smoke houses need a lot of firewood for their operation, for example, one smoke house act as a store house and keeps smoking the rubber sheets for a long time. Another smoke house functions as a centre for drying wet sheets for about 10 smallholder plantations. Roughly, four to five kilogrammes of firewood is consumed per rubber sheet. These numbers depend on the volume of the smoke house. The source of firewood is generally the forest patches in the area and rubber plantations. Less often, firewood is obtained from saw mills as well.

To prevent deforestation from logging, HEDO established five energy efficient rubber drying houses fueled by waste sawdust which would have been disposed along river banks or burned outdoors. As a result, the vast amount of greenhouse gases emitted in the production process was drastically reduced. In addition, these efficient drying houses enabled the beneficiaries to reach the highest quality in rubber sheets, which resulted in higher profits. The innovation supported by SGP was introducing biogas technology through the use of rubber wastewater, transforming an environment hazard into profit. Two biogas plants were built as models and generate biogas from effluents discharged in the processing of rubber sheets as well as household waste. By using the effluents released from the rubber latex cleaning and coagulation process (Serum), which is slightly acidic, and previoulsy were directly discharged without any cleaning in open lands or in nearby streams, the project also contributed to protect the biodiversity of the area, especially of the Bandula Barb (Puntius bandula),  a critically endangered and endemic species threatened by water pollution due to rubber effluent.

At the conference, Dr. Keerthi Mohotti, Chairman of National Steering Committee of SGP in Sri Lanka, presented on behalf of HEDO as its Director, Mr. Anura Premathilaka, who could not attend the event. In his presentation, Dr. Mohotti explained the importance of rubber plantations in agro-forestry, as well as the environmental issues caused by smallholder rubber plantations and rubber processing. Dr. Mohotti highlighted the innovative nature of the components executed in this project with special emphasis on conversion of the conventional smoke houses -consuming large amounts of firewood- to energy efficient drying houses using saw dust, an industrial waste which would have otherwise been disposed along river banks or open burned, resulting in environmental degradation.

According to Mr. Anura Premathilake, rubber plantations face a severe threat due to the continuous rubber price drop over the years. As a result, communities now tend to remove rubber and invest in oil palm cultivation. This will greatly reduce the rubber forest cover which is counted as 12% of the total forest cover of the island. Under the project several activities were implemented to find solutions for the problems above. For example, the community was trained to produce RSS grade 1 rubber sheets at a lower cost. Rain guards were distributed to make latex tapping viable in rainy season. The modern drying houses are very easy to operate and the youth and women find it attractive. These drying houses have also helped to reduce health problems related to the inhalation of smoke while working inside the conventional smoke houses. Mushroom cultivation was introduced as an optional livelihood when the income from rubber is low. A market chain was also established with the support of a private company and funding from Sampath Bank. HEDO expects that the communities will remain in the rubber industry with the increase of income due to value addition. If the rubber prices rise, more people will grow rubber and this will be helpful in the carbon sinking process as well. Many people have already requested to join in the initiative. Therefore HEDO expects to upscale the project to national level. 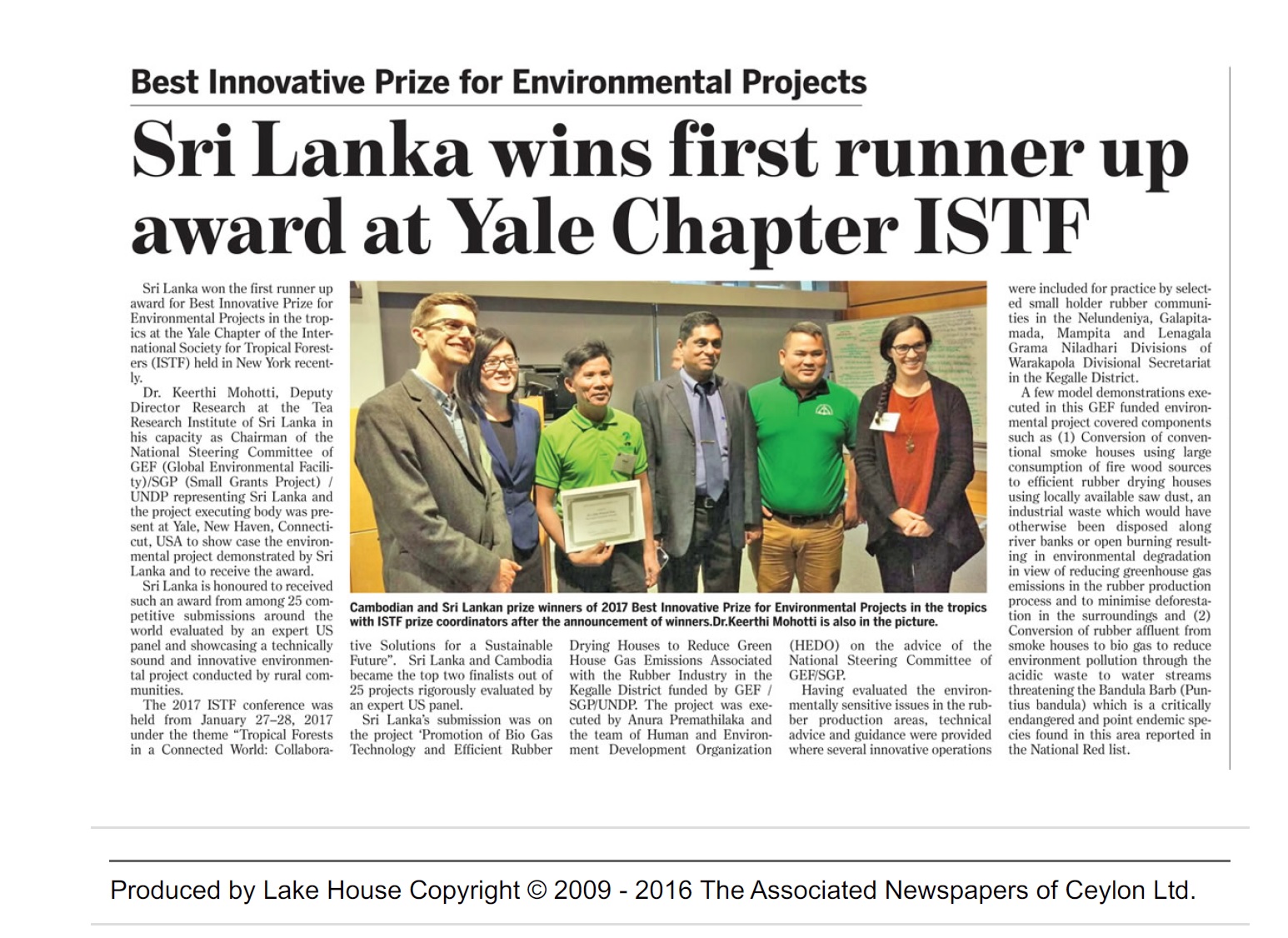