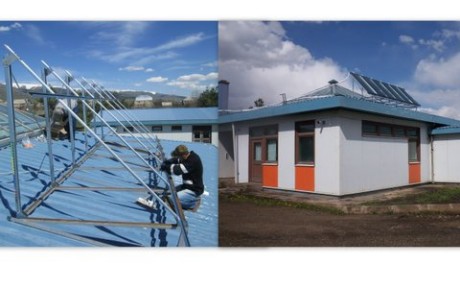 Due to its geographic conditions and socio-economic situation, Armenia is acutely vulnerable to the impacts of climate change.

Despite a lack of fossil carbon energy resources, Armenia has immense solar potential as well as a number of energy efficiency improvement opportunities. However, insufficient capacities and available resources imply that these are not adequately utilized.

The community of Stepanavan, in Lori region of Armenia, is located in the north of the country in the mountainous forest zone with cold winters and six months long heating seasons. In the early 1990s, the surrounding forests and urban green areas of the town suffered heavily as a result of economic and energy crisis. Until today, the community still partly relies on forest firewood because of high electricity and gas prices.

Energy resilience through energy efficiency and application of solar energy

In 2014, Stepanavan officially joined the global campaign "Making Cities Resilient: My City is Getting Ready". The campaign seeks to incorporate disaster risk reduction and climate change issues into development programs in order to better enable sustainable development in communities.

In November 2014, the Global Environment Facility’s (GEF) Small Grants Programme in Armenia (in partnership with Swiss Agency for Development and Co-operation, World Vision Armenia and UNDP Disaster Risk Reduction project) supported the Stepanavan community administration in implementing practical measures aimed at increasing the town’s energy resilience. In particular, the project supported the installation of solar thermal systems in three kindergartens and a community sports school, as a new approach to meet domestic hot water demand. To reduce energy consumption and increase the comfort of the buildings, the project set up a gas-fired boiler heating system that replaced the open chamber gas fired room heaters in one of the beneficiary kindergartens, as well as installed energy-efficient doors and windows in another one.

Availability of “green” hot water for 24 hours improved sanitary and hygienic conditions of the kindergartens. The installation of a gas-fired boiler based heating system in one of the beneficiary kindergartens enabled removing the existing costly and inefficient open chamber gas-fired room heaters, eliminating child health risks associated with carbon monoxide gas poisoning, fire and explosion.

As a result of the application of solar thermal technology and implementation of energy efficiency measures in the community kindergartens, daily use of natural gas will be reduced by at least 30 m3, ensuring a monetary saving of at least US$5,500 yearly. The money saved will be directed towards solving other essential needs of the kindergartens and sports school.

"Our kindergarten is a stone building which could accommodate 140 children. The hot water solar system is new for us and we could feel its benefits and comfort very quick. It’s so nice to have a hot water supply. It makes great savings, and since we could also manage to install energy-efficient windows and new boilers, our kindergarten will be fully functional all year round. I would like to express my thanks to UNDP- GEF in Armenia, World Vision, Municipality of Stepanavan and the NGO implementing the project”, said Ruzanna Danielyan, Director of Stepanavan kindergarten #1.

The project also raised awareness of the local population on climate change, its challenges and other global environmental issues that GEF addresses. The staff of the educational institutions, individual citizens and non-governmental organizations of the community were directly involved in the project activities.

“We realized the benefits after the system was not functioning for two days and everybody was confused. If possible, I would love to install such a system at home, so that our children have the same comfort. The project is valuable in the sense that it targets our children. Please be sure that I express my thanks on behalf of all parents”, said Armine Dokhoyan, parent of Stepanavan kindergarten #1. The kindergarten staff, mainly consisting of women, was involved in all trainings on operation and maintenance of the solar hot water-supply system, as part of a women’s empowerment component.

Stepanavan community is putting into action a community resilience plan, which pays special attention to implementation of energy conservation projects, as well as green landscaping and preservation and maintenance of green zones. The improved energy resilience of Stepanavan will reduce the pressure of urban development and production activities on the surrounding forest ecosystem, in favor of the development of the community as a resort and ecotourism site.

Dissemination of economic benefits to be produced by the projects will serve as an incentive for soft-term loans with a high rate of return to the investments made over the long period of time. This approach is viable especially in light of expected increases in prices for natural gas and electricity in Armenia.

Project knowledge and experience on practicing solar technologies and associated economic benefits will be widely disseminated throughout other communities of Armenia, especially in the twelve cities that officially joined the “Making cities resilient: My city is getting ready” global campaign.

“It was an essential work and since it was new for us, it resulted in new good ideas that can be replicated elsewhere. It also made us initiate not planned renovation works in kindergartens with our own efforts and participation”, said Hrant Abrahamyan, head of urban development and municipal economy department of Stepanavan municipality.

This article is originally published by UNDP Armenia.