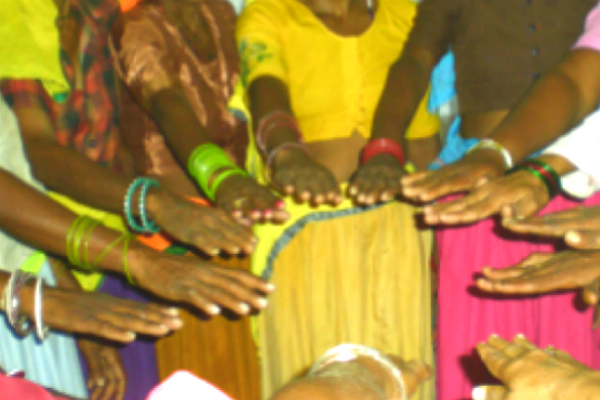 On March 8, 2014 the world is celebrating International Women's Day with this year's theme highlighting the importance of women and gender equality as agents of economic and social development. This emphasis comes in the light of increasing recognition that women's participation typically leads to better and more sustainable development results.

Recognizing women's critical role in achieving sustainable outcomes, projects of the GEF Small Grants Programme have carefully integrated environmental goals with capacity building and economic empowerment for women over the last 20 years. In addition, SGP has been building an enabling environment for women's participation in development by implementing a series of gender-sensitive policies and institutional mechanisms to advance gendermainstreaming at the national and local level. Those include, for example, implementing a policy on gender mainstreaming to guide programming in all 125 countries and the review of gender considerations by a designated gender-focal point on each National Steering Committee during the grant approval process.

At present, 92% of SGP country programmes promote active participation of women in the design, implementation and M&E of projects, 46% actively partner with women's organizations at the local level to enhance gender mainstreaming among SGP grantees, while 20% have developed a specific gender mainstreaming strategy or gender action plan for their country programme. With these advances, SGP hopes to create an enabling environment to strengthen the capacity of women to be involved, actively engage and benefit from development processes in a sustained and effective manner.

As the following examples show, women apply a great deal of ingenuity to their projects, many of which combine women's particular, traditional knowledge and practices with the new technologies and approaches.

In Nepal, for instance, the Women Environment Protection Committee (WEPCO) worked with SGP to increase its efforts in recycling municipal waste through composting and Biogas production. The group constructed a biogas plant and implemented a household and business waste collection, composting and recycling system. As a result, WEPCO manages 9 tons of waste on a daily basis or nearly 1,000 tons of waste per annum, which would otherwise go to the landfill sites. WEPCO has also established a saving and credit cooperative which comprises 496 female members and has mobilized USD 123,924 in loans for 150 women. In addition, WEPCO was able to mobilize participation from 892 women in 30 groups from various parts of the country. WEPCO's biogas model has been seen by over 5,000 visitors and been replicated in other 20 sites so far. This led to the implementation of the government-sponsored Biogas Subsidy Programme and replication of the project in 20 other sites. The project has received numerous awards, including the the Sri Lanka's "Women and Environment Conservation Award in 2010, the SEED award and UNEP's "Gender Equality Award" in 2011." The project was also selected by UNFCCC for its highly coveted Momentum for Change Lighthouse Activities. 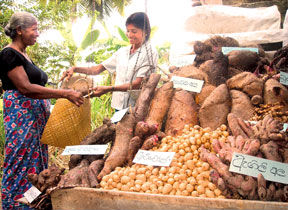 In Sri Lanka, the Community Developmet Center (CDC) Aranayake, an organization led by a group of motivated rural women, started an initiative to revitalize the cultivation and use of the increasingly rare tubers and other root vegetables in daily meals. After training in seed conservation, organic farming and soil conservation, the women farmers established 100 thriving home gardens, 10 of which were developed as model farms to draw lessons and inspire others. To date, 61 varieties of yams and roots have been cultivated which are not found in any one place in the country. The women have been able to increase their income by 7 to 15 times by selling their vegetables and a small group women has also been experimenting with value-added products, such as packaged fried chips and sweet meats made with yams. After organizing themselves into small farmer societies at the village level, the groups also established a successful savings and credit schemes to fund entrepreneurial and welfare activities in the villages. The fund, which has a payback rate of 98%, has allowed the women to break out of debt and acquire substantial savings. With the purchase of a piece of land, the cooperatives established a farm and training center which has allowed them to extend its work to 18 villages and over 2,000 direct beneficiaries during the last ten years. Due to its success, the project won the Equator Prize in 2008. 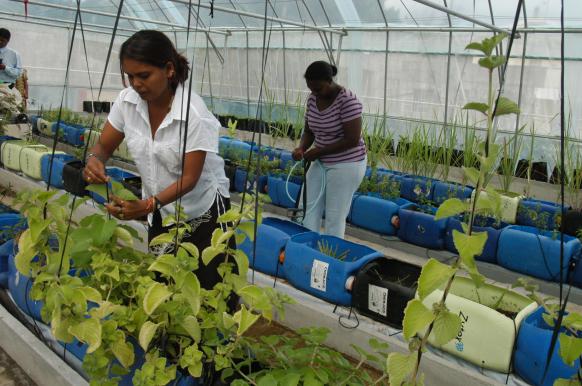 In Mauritius, the women's group APEDED (Association Pour l'Education des Enfants Defavorises) worked with SGP on developing an organic herbal tea enterprise to empower poor, unemployed women. The enterprise, which was designed as a sustainable and environmentally friendly enterprise, set up a small, solar-powered small nursery to produce organic tea herbs and trained women in sustainable production practices. With a current production capacity of about 8,000 packets of herbal tea per month, APEDED now produces a collection of 19 herbal teas that are exported to countries such as China and France. The solar-powered production unit generates around 14,065 kWh of electricity annually, of which some 10,000 KWh will be sold to the grid for an estimated revenue of US $ 6,000. The revenues from the tea and the solar power enable APEDED to continue to provide social and educational programmes for vulnerable youth. It now runs a small enterprise to conserve plant genetic diversity, and provides green jobs directly to 20 women as well as indirectly to 28 others from whom it buys medicinal plants. This initiative has received numerous awards including the Green Africa and the Emerging Exporters Gold Award from Mauritius.