The GEF Small Grants Programme (SGP), implemented by UNDP announced today that it is implementing a portfolio of Community-Based Adaptation projects with over US$16 million of funding leveraged from different partners and donors. The announcement was made on the first day of a five-day training workshop for the SGP National Coordinators of the Small Island developing States (SIDS) in the Caribbean, which also launches the implementation of SGP's SIDS Community-Based Adaptation project in Barbados and OECS countries. To date, SGP has supported the development and implementation of over 100 CBA projects worldwide and the production of methodologies, publications, videos, guidebooks, as well as providing technical contributions in major conferences.

The SIDS CBA workshop is meant to discuss challenges of the implementation for the SIDS CBA project in Caribbean region and will focus on cross country and practical learning. Particularly, the participants will be exposed to and discuss the key vulnerabilities and impacts of climate change, learn how to use vulnerability assessment methodologies at the local level and how to capture and communicate knowledge generated by the project. The meeting will also provide an opportunity to exchange ideas, lessons and good practices on community-based adaptation approaches from experienced SGP country programmes in the region that have already been implementing similar projects. The workshop is being held in Port of Spain, Trinidad and Tobago fromMarch  6-9, 2013 and includes a site visit to a planned CBA project where participants will have a practical training on site on Vulnerability Risk Assessment (VRA).

The major donors providing financing for SGP's work on CBA include the Global Environment Facility Strategic Priority on Adaptation (SPA) and the Australian Government Overseas Aid (Aus AID). Approximately $6 million in new AusAid funds will help SGP to expand its reach to vulnerable communities in SIDS, build upon their knowledge and apply and adapt the methodologies developed and tested by previous community-based adaptation projects implemented by SGP across the globe to reduce their vulnerability to the impacts of climate change. In the last 4 years that SGP has been piloting CBA approaches and methodologies, SGP grantees have received 4 awards for their innovative approach to climate change adaptation including one by the UNFCCC as part of their Momentum for Change. 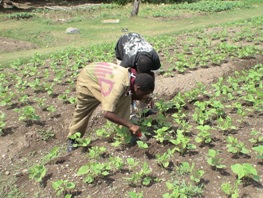 Communities are often at the forefront of unprecedented climate change impacts but are the least able to cope with them. The methodologies supported technically and financially by SGP, provide communities with concrete examples on the potential impacts of climate change, valuable information on how to assess their vulnerability and most important, how to adapt to these challenges and mitigate these risks by developing their own solutions.

Starting in 2008, SGP started to pilot CBA projects with an initial UNDP project funded by the Global Environment Facility (GEF) Strategic Priority on Adaptation (SPA CBA) with US$ 4.5 million dollars. Through this project, SGP strengthened the resilience of communities addressing climate change impacts, tested the Vulnerability and Resource Assessment (VRA) tools and other community-engagement instruments and methods, and generated knowledge and lessons for replication and up scaling. The SPA-CBA project was implemented by SGP in 9 pilot countries.

In 2009, SGP and the Australian Government Overseas Aid Program (AusAid) started the Mekong and Asia Pacific Community Based Adaptation project (MAP CBA) with US$ 6.2 million dollars in funding from AusAid aimed at improving the resilience of communities in 20 countries of the region while also identifying relevant policy lessons generated by the horizontal replication of successful community practices and the integration of the lessons into national and sub-national policies. Currently, MAP CBA is in its fourth year of implementation, with 21 projects funded in total, 9 of which have been completed.

In 2011 based on the initial success of the MAP CBA project, AusAid contributed an additional US$ 5.4 million dollars to expand the project to cover 19 additional Small Islands Developing States (SIDS) for a total covarge of 38 target countries worldwide. SIDS CBA, launched a year ago, has already approved 16 regular project grants and 13 planning grants. These projects cover a range of areas including agricultural management, integrated land and coastal area management, fresh water security, marine management resilience and knowledge management.

To capitalize on the implementation of CBA projects across the countries in the region and to promote synergies and more possibilities for knowledge exchange that lead up to replication and scale up the country, SGP is forming a Sub-regional Technical Advisory Network for SIDS in the Caribbean. 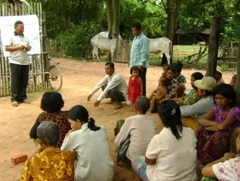 SGP's pioneering work in CBA is already being scaled up and influencing policy, for example in Jamaica the CBA programme is being recognized as good practice to be included in the national Climate Change policy, whereas in Cambodia, SIDA has provided an additional US$1 million to continue to fund CBA activities at the national level through the SGP from 2012-2014.

Similarly, lessons from Sri Lanka's CBA projects are now being mainstreamed in to larger adaptation projects and the Adaptation Fund has recently approved a US$ 7.9 million project that incorporates several lessons from SGP CBA projects. Moreover, the GEF's Special Climate Change Fund (SCCF) will also finance Sri Lanka's Ministry of Economic Development to integrate environmental best practices, including some of the lessons from SGP CBA projects, within key rural development programmes having a major impact on national policy as a result of the SGP portfolio.