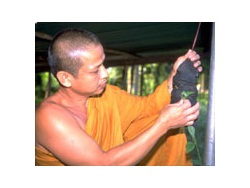 During the first half of 2000, the Institute for Sustainable Agriculture Development taught farmers from seven villages in the Tambol Mae Tha area of the Sunsai District, north of Chiang Mai, how to make energy efficient clay stoves. Those small stoves were an instant hit with local women, since they consume less wood and cook faster than the open fires villagers have traditionally used. But learning to make the stoves was merely a first step in a project that has included promotion of organic agriculture, income diversification and preservation of forest patches.

Financed by the GEF Small Grants Programme (SGP), which is implemented by the UNDP, the one-year Tambol Mae Tha project had various components, but at its core was village-level energy efficiency. As is the case in much of the Third World, families in the Sunsai District do most of their cooking with firewood, which not only places pressure on local forests but also adds carbon dioxide to the planet's atmosphere. Though firewood accounts for only a small percentage of global greenhouse gas output - fossil fuels are the main culprit - wood is one of the dirtiest energy sources. Poonsin Sreesangkom, SGP National Coordinator for Thailand, pointed out that burning a kilogram of wood produces 1.46 kilograms of carbon dioxide, because each carbon atom bonds with two oxygen atoms.

Just as problematic as firewood's contribution to global warming is the forest destruction that wood gathering causes. Firewood collection constitutes a significant pressure on Thailand's dwindling forests. According to statistics from the country's Royal Forest Department, Thailand has already lost more than 75 percent of its original forests, and during the 1990s, its trees were being cut at a rate of about 140,000 hectares per year.

Nikhom Chaiyawan, project coordinator for the Institute for Sustainable Agricultural Development, said trees have gotten scarce around the villages of Tambol Mae Tha, which means people have to walk farther to find firewood, or pay more for it. The Institute consequently promoted the planting of fast growing trees near the villages for eventual harvesting, and the use of clippings from local orchards - farmers in the area grow mango, tamarind, guava and longan - to make charcoal. One community is managing a patch of forest, harvesting only its dead wood.

"There emerges a relationship in the dimension that the community can live peacefully with the forest," said Chaiyawan.

The Institute also taught villagers to make airtight kilns out of steel drums, which they use to cook wood into charcoal. A by-product of charcoal production is "wood vinegar," or pyroligneus acid, which the farmers collect in bottles to sell, or use in their organic vegetable gardens - another of the project's innovations. The nutrient-rich wood vinegar is added to compost, or applied directly to the plants, thus decreasing the need for chemical fertilizers.

Though the approximately 50 farmers who participated in the project initially made stoves for themselves, they are currently producing about 150 stoves per month for sale in neighboring villages. The men make the stoves, but it is the women's job to sell them. As part their sales pitch, the women give demonstrations in which they cook similar dishes using a stove and an open fire, to show that the stoves require less fuel and cook faster, which can save the buyer both time and money.

Some women also use the stoves to prepare snack foods, such as rice puffs and crispy rice, which they sell at local festivals and markets. Chaiyawan said he wants to help the women expand their markets for such items, and has encouraged the communities to find other such income generating activities, so as to multiply the project's benefits. But he added that it is up to the villagers to figure out what they want to, and can do; the Institute merely makes suggestions, and offers technical assistance.

"We are a coordinating center," Chaiyawan said "We just formulate the process so that the community will realize there is a problem and participate in activities to correct it."

Project participants have benefited from various partnerships that grew out of it. The Sustainable Agricultural Network, of which the Institute is a member, has given technical assistance to the villagers. The government Agricultural Research and Development Office has also helped them with their organic gardens. And the Department of Energy Development and Planning recently gave members of local women's groups a course in building solar ovens. Now the women of Tambol Mae Tha can cook lunch without even burning a twig.